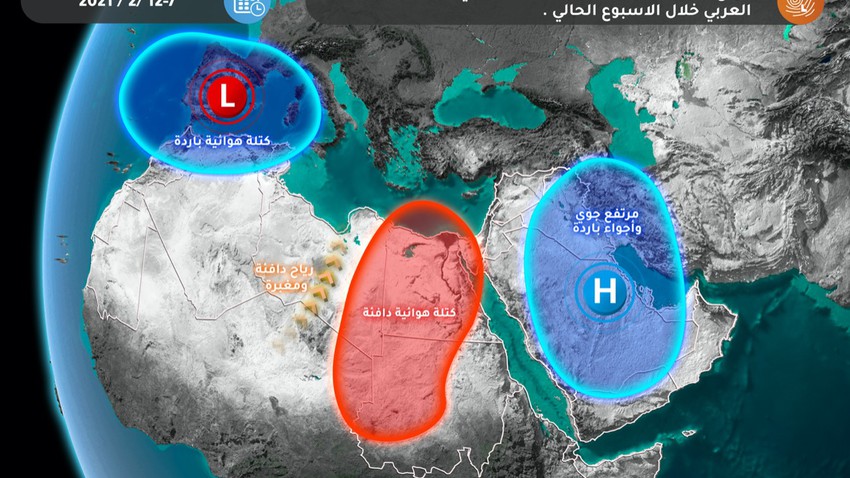 Weather of Arabia - Adidi from the regions of Morocco and Algeria was affected over the weekend by strong sandstorms that led to a significant decrease in the horizontal visibility and a tangible rise in temperatures, and this is due to the approaching of an Atlantic depression originating from the Moroccan coasts that begins its effects on the countries of the Maghreb on a day Saturday.

A series of weak and moderate air depressions on Morocco, Algeria and Tunisia until Wednesday

Showers of rain fall on the northern regions of the Kingdom of Morocco, Algeria and Tunisia on Sunday and Monday, as a result of the concentration of an air depression over the western European continent, and it is accompanied by turbulent weather conditions and strong winds, especially on the coasts, working at a great height of waves.

The temperatures are also dropping as a result of the passage of the cold air mass accompanying the depression after the whole of the Maghreb region witnessed an unusually hot weather during the weekend.

The weather will stabilize temporarily on Tuesday before the regions of central and eastern Algeria and northern Tunisia are affected by a new air depression on Wednesday, which will be between weak and moderate activity.

With the western Mediterranean region affected by a series of depressions, it is expected that warm southerly winds will blow throughout Libya on Sunday and Monday, as temperatures are higher than their average for this time of year.

However, during the second half of the week, temperatures decrease significantly with the beginning of the cold air masses accompanying the depressions on the western Mediterranean, and the intensity of the dust in the air decreases.

A wide air elevation covering Egypt, the Levant, Iraq and the Arabian Peninsula, and stable weather in Sudan

The regions of northeastern Saudi Arabia, southern Iraq and Kuwait are witnessing unstable weather conditions on Sunday morning, which are the remnants of the instability of the weather that affected many countries in the region in recent days.

However, the weather will return to full stability on the Arabian Peninsula on Sunday evening with a clear drop in temperatures, and the weather will stabilize throughout the Levant and Iraq during the remainder of the current week.

Alsaba winds blow on the coasts of the Red Sea on Sunday and Monday, working to raise dust and dust.

Stable weather prevails throughout Egypt and Sudan, with relatively warm to hot weather.