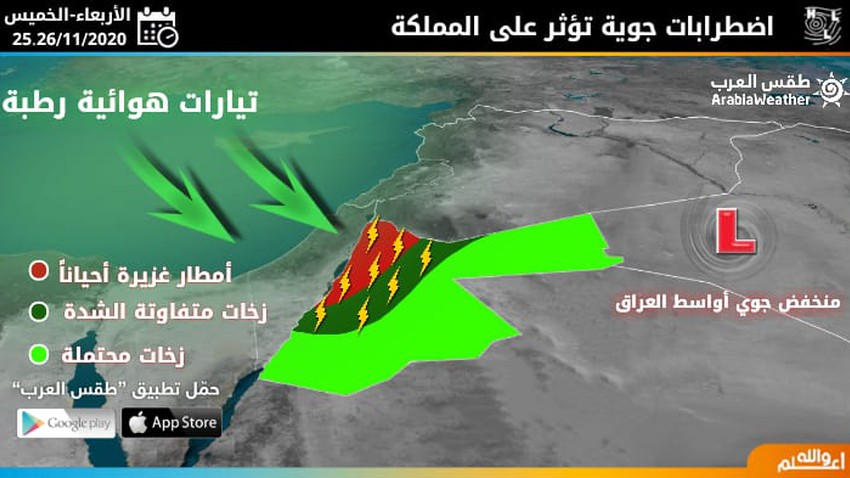 Arab Weather - The latest output of numerical models indicates that the Kingdom is affected by air turbulence, starting from the hours after noon on Wednesday, so that the temperatures decrease and the weather prevails in cold day and is stable during the first hours of the day, and with the hours after noon and afternoon on Wednesday, the Kingdom is affected by a state of air instability At the forefront of a cold and humid air mass pushing towards the eastern basin of the Mediterranean Sea, where opportunities are gradually opening up for showers of varying intensity of rain in random areas of the Kingdom.

The Kingdom is affected by a cold and humid air mass during the hours of the night of Wednesday / Thursday, and the weather turns to become cold in general, and "God willing" showers of rain fall in many parts of the Kingdom, including the northern and central regions, some southern highlands and eastern parts, and the rains are of varying intensity and abundant in some Areas, especially with the late night hours, and fog is expected to form over mountain heights as a result of crossing clouds touching the surface of the earth.

Further decline in temperatures Thursday and the continued rainfall in different regions!

There will be a further drop in temperatures on Thursday, so that the weather will be relatively cold in all regions as a result of the flow of more cold air towards the Kingdom, and showers of rain are expected in different regions of the Kingdom that will be abundant in the early morning hours in the central regions in particular, With the possibility of rain remaining available in different regions of the Kingdom.

1- Keeping away from valleys and streams of torrents and reefs due to the high risk of running them.

2- Wearing winter clothes and being aware of sudden weather fluctuations.

3- Driving cautiously on the roads due to the low horizontal visibility due to fog in some areas.