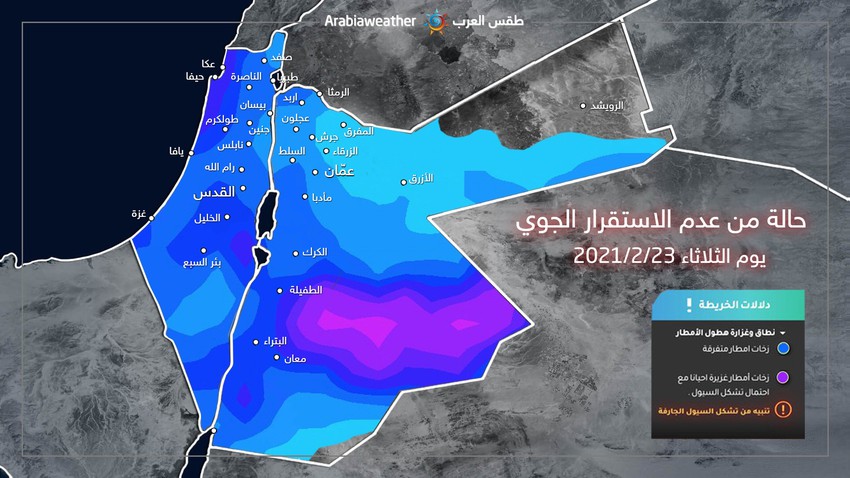 Arab Weather - Muhammad Awaina - The outputs of the numerical models indicate an expectation of the emergence of a state of atmospheric instability over the Kingdom in the middle of the week, which brings with it an unstable atmosphere, so that it is accompanied by precipitation of varying intensity in separate areas of the kingdom, God willing.

The Siberian highland is accompanied by a very cold air mass

The current week is characterized by a large and wide extension of the Siberian air height towards large areas of the Middle East, where a dry and cold mass rushes towards the Kingdom, which will lead to the prevalence of remarkably cold weather throughout the regions of the Kingdom during the day and very cold at night, and as a result of the high surface air pressure over Iraq is blowing on The Kingdom's eastern winds work to increase the sense of cold dramatically , as the lowest temperatures drop with the early morning hours below the 6 ° C barrier in different parts of the Kingdom.

As a result of the continued concentration of a strong air height in all layers of the atmosphere throughout the European continent and the north of Africa, a cold and humid air mass in the upper air layers is pushing from eastern Europe towards the region, passing through the Egyptian lands, this coincides with the expansion of the Red Sea depression towards the southern Levant, including the Kingdom And convergence between them occurs over the region and unstable weather conditions arise.

As of Monday / Tuesday night, the country is affected by a state of air instability and clouds multiply at high and medium altitudes, interspersed with some thunderstorm clouds, so that the opportunity is ripe for thunderstorms of rain in separate and limited parts of the Kingdom.

On Tuesday, the Kingdom is increasingly affected by unstable weather conditions, so that an additional decrease in temperatures occurs, the eastern winds are active, and quantities of clouds gradually multiply at different heights, and the opportunity for thunderstorms to rain in different and random parts of the Kingdom, especially the southern and southeastern parts, increases. The precipitation may be heavy and accompanied by showers of hail that may accumulate , and these weather conditions may lead to the formation of torrents in some geographical areas.

The state of air instability continues until Wednesday, when the opportunity remains ripe for thunderstorms of rain in some areas, weakening and fading on Wednesday evening, so that the weather will return to stability again.

In contrast to depressions, the distribution of rainfall during instability is irregular and random in nature, and it varies in intensity from one region to another.

Weather around the world | The coldest storm in years .. 73% of the United States is covered with snow