Jordan | An extension of the Red Sea Depression as of Tuesday .. What are its effects on the Kingdom? 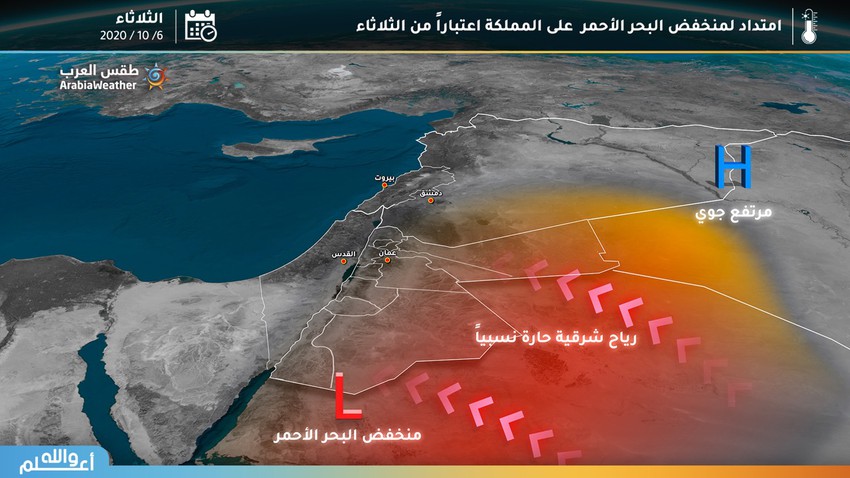 Arab Weather - A change in temperatures is expected as of Tuesday, as the Red Sea depression expands towards the southern Levant region, including the Kingdom, pushing you with a relatively hot air mass and thus successive rises in temperatures during the second half of the week.

Dry easterly winds at the end of the week

In conjunction with the extension of the Red Sea Depression towards the Kingdom, the area of the air height is expanding over Iraq from the east, these weather elements and their positioning in these places will work on activity in the speed of the eastern and southeast winds over the Kingdom on Wednesday and Thursday, as temperatures record more rise The weather becomes relatively hot with the spread of dust in the air.

What are the effects of the Red Sea depression usually on the region?

The extension of the Red Sea depression towards Jordan usually causes an eruption of hot air masses and heat waves sometimes during the spring and autumn seasons, and this depression shrinks during the summer and the chances of its impact on the Levant region diminish.

On the other hand, the Red Sea Depression causes atmospheric instability, especially if its extension towards the Kingdom coincides with an eruption of cold air masses from the north, in which case strong instabilities are formed accompanied by thunderstorms and dust storms, usually during the spring and autumn seasons.

As for its effects during the end of this week, they will be limited to high temperatures, a weak case of air instability in the south of the Kingdom and activity in the speed of the dusty eastern winds.

Weather and expected temperatures in Jordan on Sunday 4/18-2021