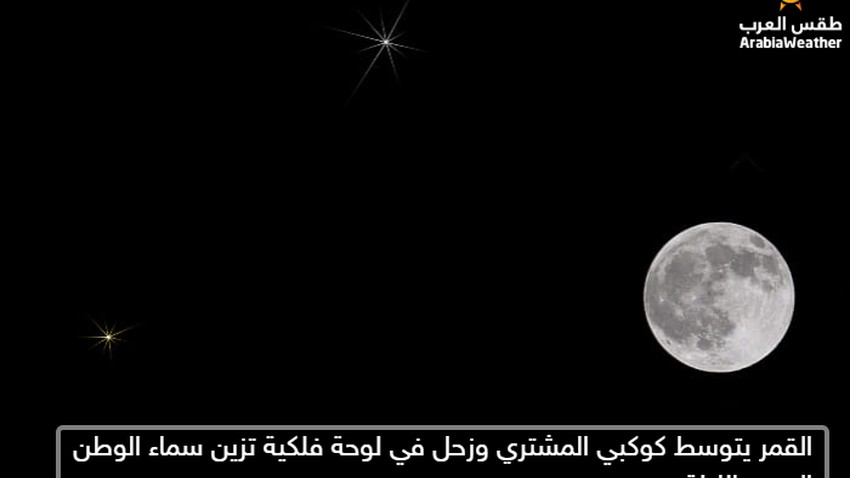 Weather of Arabia - The sky of the Arab world is witnessing tonight (Sunday night / Monday) an astronomical event, which can only be seen with the naked eye, as the full moon will be surrounded by two planets; They are Jupiter on the right, and Saturn on the left.

The astronomical association in Jeddah confirmed in a statement that during the sunrise the moon will notice that it may be pink or orange due to dust, smoke and pollutants in the earth's atmosphere that scatter the white light reflected from the moon so that the blue spectrum with short wavelength remains and the colors of the spectrum remain Red has a long wavelength that reaches our eyes and we see them, which is the same reason we see the sunset sunset red .

Full Moon, Saturn and Jupiter are an ideal opportunity to photograph

She added that after the moon rises above the horizon, he will notice that in conjunction with the giant Jupiter, our solar system will be separated by two steps and near Saturn, all of which are organized in a celestial triangle easily seen with the naked eye, which is an ideal opportunity to photograph .

The occurrence of the moon near Jupiter is intended only on the dome of the sky, but they are not close to each other in space. The moon is 378,000 km away from us tonight, while Jupiter is 621 million km away .

And the "Jeddah Astronomical" showed that Jupiter would appear to the observer with the naked eye as a white light point, and upon observing it in telescope or telescope, he would see the disk of the planet and around it the four large moons called Galileo moons, where they appear as small light points near Jupiter .

She also stated that this time of the lunar month is ideal for detecting radioactive craters on the surface of the moon unlike the rest of the terrain that appears flat due to the full moon falling in the sunlight .