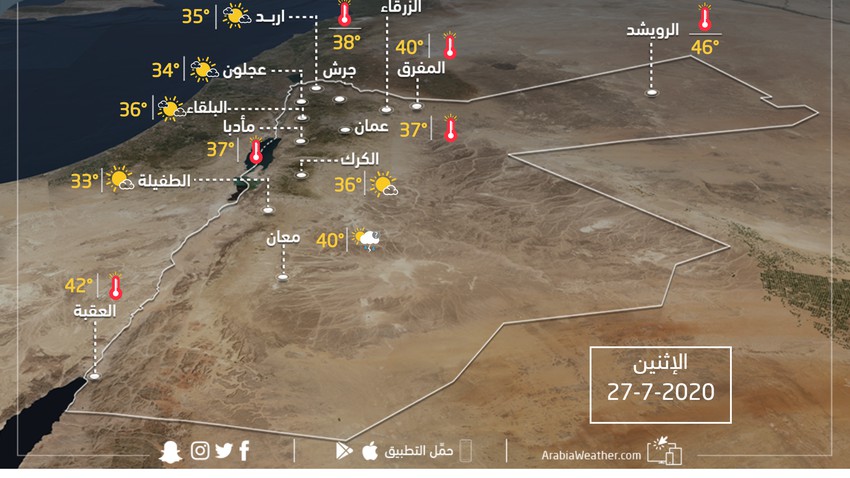 Arab Weather - The Kingdom is expected to continue to be affected by the regional heat wave on Monday, but it is accompanied by a situation of air instability in the afternoon and evening due to the flow of moist air currents in the middle atmosphere.

In detail, temperatures continue to be around 8-10 ° C above their average for this time of year.

And the weather remains generally hot to very hot in most regions of the Kingdom, with maximum temperatures approaching 40 degrees Celsius in many cities and villages, including the capital, Amman.

An opportunity for rain and rain Monday afternoon

It is expected to gradually emerge quantities of mid-rise clouds and prepare the opportunity with afternoon and evening hours for local thunderstorm showers of rain in some regions, especially in the southern and eastern Badia regions, accompanied by strong sudden winds for short periods causing dense waves in the vicinity of those Regions.

The weather is relatively hot in different regions on Monday / Tuesday night, and it is humid over some heights, which increases feelings of distress and heat.

Large quantities of medium clouds appear, and thunderstorms in local areas may show precipitation in some areas, accompanied by strong, sudden winds for short periods, causing dense waves in the vicinity of these areas.

The winds are fluctuating between northwesterly and northeasterly moderate in speed, active at intervals, especially with the passage of cumulus clouds.

During the heat wave and high temperatures ... Important tips and advice to protect you and your vehicles and crops