Saudi Arabia | The rainy situation continues ... and more rain is expected in these areas 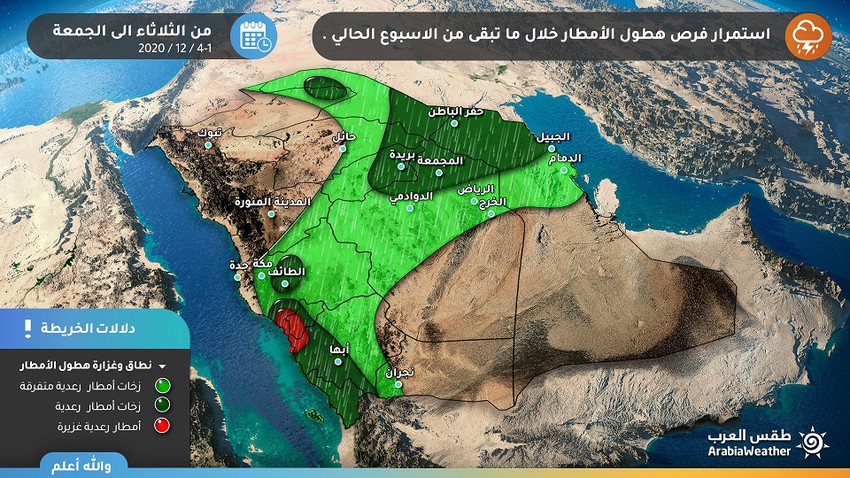 Weather of Arabia - Sinan Khalaf - The latest outputs of computer simulations for rain forecasts show that many regions of the Kingdom will continue to be affected by the rainy conditions, with varying degrees of rain on Wednesday and Thursday until Friday, God willing, with the control of temperatures below their usual rates for such time of year.

Opportunities for rain persist in many regions, including Riyadh

The latest forecasts indicate the continued formation of bands of rain clouds of varying intensity throughout the southwestern region, "Jizan, Asir, Al-Baha, and Taif", up to the southern parts of Makkah, in the form of heavy thunderstorms at times, and may be accompanied by showers of cold at intervals.

As for the capital, Riyadh, it is expected, God willing, to remain under the influence of unstable weather conditions on Tuesday and Wednesday, so that clouds continue to flow across the western façade of the city, and the opportunity remains ready for sporadic showers of rain from time to time. It is expected that they will generally be light in intensity and God knows best. .

An important link to follow the rain radar in Riyadh

The chances of rain will also include the northern and western parts of the Riyadh region, in addition to Al-Qassim, Hail, Al-Jawf, the northern borders, Hafar Al-Batin, and reaching Jubail and Dammam, in the form of showers of varying intensity and God knows best.