The sun is perpendicular to the Kaaba for the second time on Wednesday, July 15th 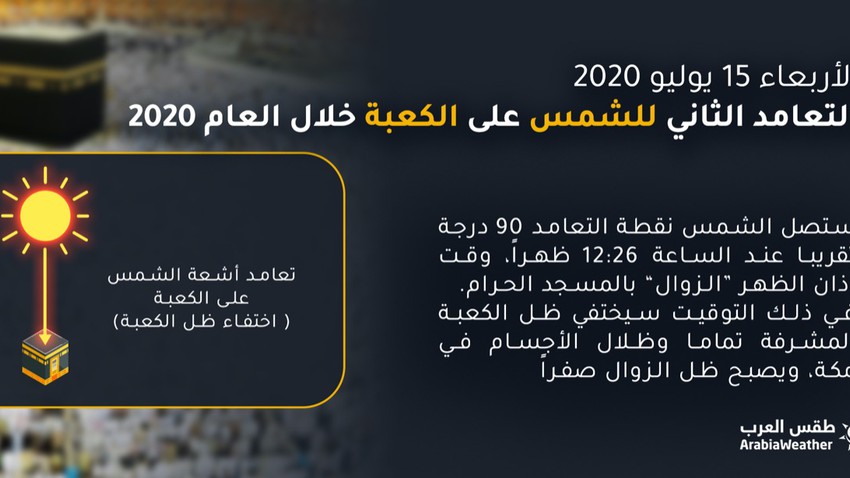 The perpendicularity of the sun over the Kaaba .. How will it happen?

When will the sun pass perpendicular to the Kaaba?

The second pilgrimage will take place on Wednesday 15 July 2020, and the sun will reach the point of perpendicular to about 90 degrees at the hour at 12:26 pm, the time of the noon prayer "meridian" in the Sacred Mosque, and at that time the shadow of the honorable Kaaba will completely disappear and the shadows of the bodies in Makkah will become shadow Meridian is zero.

How do we determine the direction of the sun's perpendicular to the Kaaba?

The sun’s perpendicular to the Kaaba is used to determine the direction of the qiblah in areas geographically far from Mecca in the Arab and Islamic countries and the regions where the sun is above the horizon, by planting a piece of wood or plastic perpendicular to the ground and shadow is monitored and the direction of the qiblah is on the side The opposite of the shadow so that the extension of the shadow indicates the location of the Holy Kaaba, knowing that this method is not useful for areas such as Jeddah and Taif due to their location near Mecca.