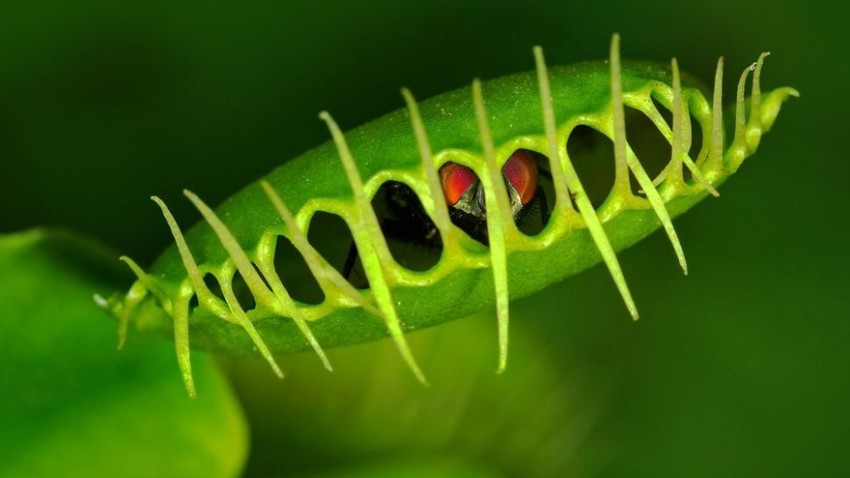 The Venus Flytrap plant is considered one of the most wonderful plants in the world, especially when you see the jaws of this plant pick up the insect and wrap around it to digest it, as this type of plant is characterized by a strange behavior from other plants, which is catching insects and small animals and digesting them, so why this strange tendency Have these plants eat insects? How does it catch its prey and digest it?

The habitat of the plant Venus-eater

Carnivorous plants live in different parts of the world, except that the origins of the insectivorous Venus go back to the states of North Carolina and South Carolina, but they are found in other states such as Florida and New Jersey, and they usually grow in moist acidic soils found in forests, especially those soils that lack Nitrogen, also needs high humidity and lots of sunlight to thrive, and today it is grown in greenhouses .

How is the process of hunting prey?

The most exciting thing about this plant is how to hunt prey and digest, entice this plant insects through the red lining on the leaves, where open leaves, and produces nectar Otari attracts insects, when insects landing it senses the capillaries sensory (trichomes) inside the petals movement of the insect, you must There should be at least two movements within 20 seconds, otherwise the petals will not close, and this mechanism protects the plant from catching other inanimate objects.

After the insect's second movement, the plant closes its jaws in less than a second by shifting the petals from convex to concave, and the cilia on the leaf edges prevent the insect from escaping like prison bars. Then the plant begins to digest the insect, during which the digestive juices are secreted, which analyze the insect.

When will the plant open its jaw again?

After 5 to 12 days, the plant will open its leaves and drop the remaining parts of the insect that cannot be digested, such as the exoskeleton, where it falls with wind or rain.

The time it takes to reopen the trap depends on the size of the insect, the temperature, the age of the trap, and how often it goes through the process, and if the object that caught it was not food (a stone, for example), the trap will reopen within about twelve hours to remove the object that was caught by mistake.

The type of prey you catch

The insect-eating Venus mainly hunts ants, but it also eats flies, beetles, mollusks, spiders and even tadpoles, and it is worth noting that insectivorous plants not only feed on insects, but also need water, gases and sunlight like other plants , except that they catch prey to be a source. In addition to food, nitrogen-rich animal proteins are used to replace the soil's deficiency of this important element.

The insectivorous Venus reproduces like many other plants, it makes seeds when its flowers are pollinated, and the seed ripens after four to six weeks and becomes black and resembles the shape of a pear, then these seeds are spread and grow into new plants.

This plant can also reproduce without pollination, as its roots extend into the soil and form a bulbous root, this root grows from the bulb to be a new plant, and the gardener can then separate the new plant and the bulb from the parent plant by cutting the connected roots.

How can it be grown

If you want to grow one or more insectivorous Venus plants, some requirements must be met such as moist roots, high humidity, full sunlight, and acidic soil poor in nitrogen, and after getting the bulb plant the root side down so that the top of the bulb is equal to the soil , So that the soil mixture contains algae and sand, and do not add fertilizers or lime, and it is advised to transfer them to new soil every few years .

In order to provide high humidity for the insectivorous Venus plant, plant it in a ground or in a glass container with a small hole, an old aquarium can be used for planting, but it must be monitored in the summer because the temperature inside the glass may become very hot, so it may be left in the sun for a while Just two hours is enough, and in winter you need to cover it at night in order to keep it warm and moist.

If you plant them outside, you will get enough insects to eat them, but if you plant them indoors, you will need to feed them some insects, a couple of flies or small slugs a month during the growing season will suffice.