After its rare appearance in Asir ... information we are publishing for the first time about the endangered animal `blue` 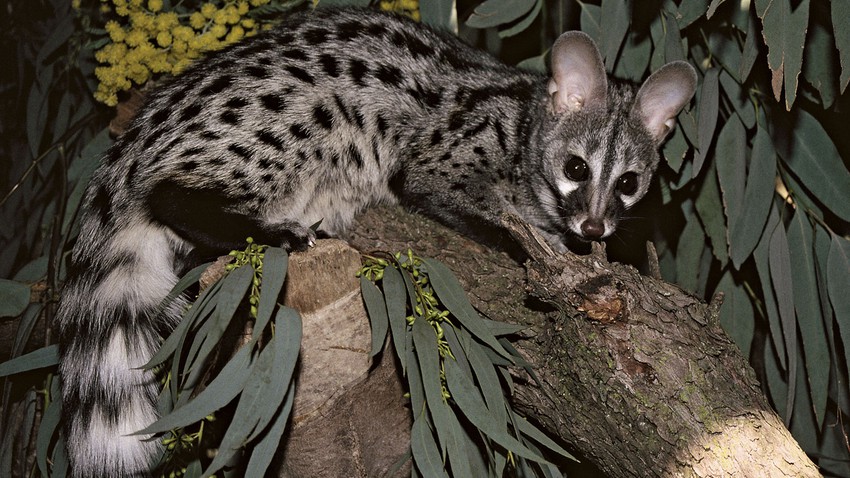 Arab Weather - Zariqa or Rabah, is that strange and rare animal that appeared in Majardah in the Asir region of the Kingdom of Saudi Arabia, and raised many questions about it, so we in Arab Weather searched and collected all the information about this blue animal, which we found to be rare, and threatened with extinction !

The naming of the blueberries

The blue animal has several Arabic nomenclature, including the rabah, the mongoose, the rabah, or the wild animal, and the common genet.

The blue animal spends the night its length while hunting, and uses its speed and stealth to capture small animals and birds, continues to bite its prey with its sharp teeth until it dies, the Rabah animal is seen as one of the first carnivores, before the break of dawn, the baboons return to their burrows to sleep.

Physical structure of a blueberry

The zebrafish ranges from 50 cm in length to 40 cm in females with the tail, and weighs about 1 - 2 kg (2.2 - 4.4 lbs).
Rabahs are distinguished by their light brown color and black spots that form the longitudinal lines on the general body of their shape, and the most distinctive part is the tail, which consists of a series of 8 to 11 dark rings.

Where is the blue animal found?

It is believed that Rabah animals may extend their lineage throughout the dense forests of the Niger Delta, including fresh water and forests, and large quantities of them crawled to the southwestern part of the Arabian Peninsula, and it is considered one of the rare animals threatened with extinction.

The gestation period of a female blueberry ranges between 56-77 days, and she gives birth in each pregnancy between 1 - 4 young, and most likely she gives birth only 2 - 3.

Blueberries feed on all kinds of small animals, including rodents, birds, reptiles and insects, and in the absence of meat, they may tend to eat fruits.

His behavior and the possibility of his upbringing

The profits were raised as a domestic pet, because it is a ferrite species, and it was bred and produced in captivity, and the result was very good, but one of the disadvantages of this animal is that it is very curious and that it produces a very unpleasant smell, which is a first way to defend itself and of course biting as a second method.