Under probation An influx of tropical humidity from the Arabian Sea carrying rain for Oman, the Emirates, Saudi Arabia and Yemen 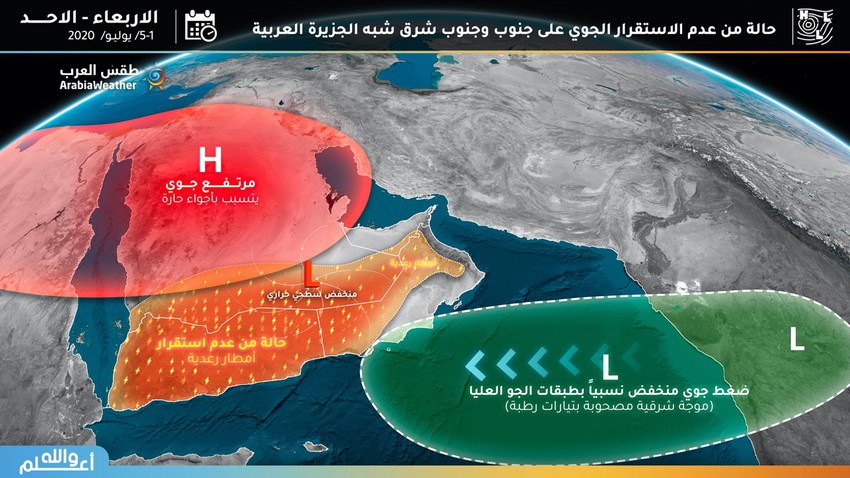 Arab Weather - Sinan Khalaf - Predictions staff in Arab weather monitors a high possibility of tropical tropical moisture flowing from the Arabian Sea towards the Sultanate of Oman and parts of the Emirates and the Empty Quarter in the Kingdom of Saudi Arabia and Yemen, which raises the possibility of rain and thunderstorms that affect these areas.

This expected air turbulence is produced as a result of an air deposition in the upper atmosphere in the Arabian Sea, which is driven by wet winds in the middle and high atmosphere towards the Sultanate of Oman and the interior parts of the UAE and Saudi Arabia, the Empty Quarter, Najran, and Yemen.

From a statistical and climatic standpoint, tropical conditions are not usually monitored in the Arabian Sea at the height of the winter and summer seasons, but tropical conditions are formed in the fall and spring seasons, that period of time when absolute control of the shear winds is absent and calm, as the Arabian Sea is teeming with what is like a battle Between the monsoons and the commercial winds, the winds in this region do not subside except for a specific period - in the fall and late spring.

Consequently, there is no integrated orbital state in the Arabian Sea. In the Arab countries, specifically in the south of the Arabian Peninsula, there is only a wave of tropical humidity that rushes from the east, working to multiply thunderstorms and showers of rain with varying intensity. And God knows best.

What are the areas covered by tropical wave and rain opportunities?

First: The Sultanate of Oman

Opportunities for rain increase in the interior parts of it, including the city of Al Ain and the interior areas in both Dubai, associated with the formation of dust, which may rush towards some western coast.

Third: The Kingdom of Saudi Arabia

Thunder clouds, laden with dust and rain, increase in strength, varying from weak to medium. They include the Empty Quarter, southern Riyadh, Najran, and Jizan Highlands.

Video | Jeddah is under the rain showers, as our followers observed it a little while ago