The ozone hole over the largest and deepest South Pole in 2020! 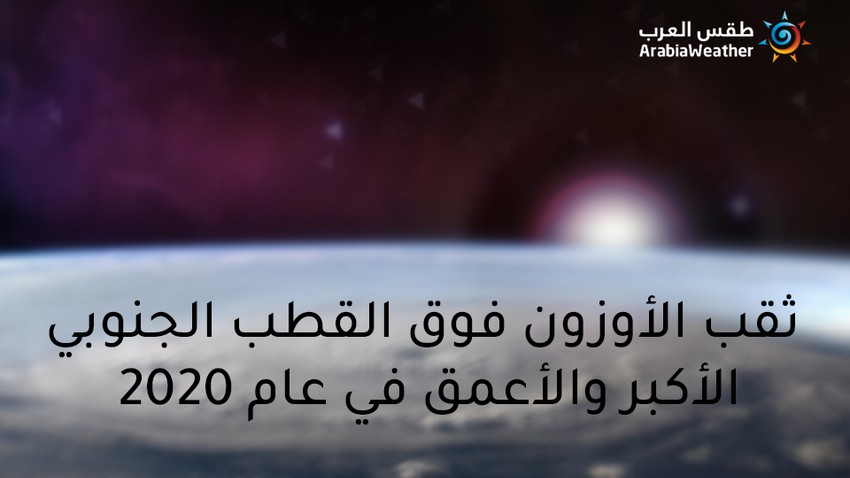 ArabiaWeather - The ozone hole that occurs annually over the Antarctic is one of the largest and deepest holes in recent years, and analyzes show that the hole has reached its maximum size .

When did the ozone hole grow?

The 2020 ozone hole grew rapidly from mid-August (8) and peaked at about 24 million square kilometers on the first of October (10).

What is the meaning of the word Dobson?

It is the unit of ozone layer, which is the number of free ozone molecules required to form an ozone layer 0.01 millimeter thick of this gas at a temperature of zero degrees Celsius and one air pressure.

Scientists see evidence that the ozone hole in 2020 has reached its limit .

Are there similarities between the ozone hole this year and previous years?

According to what the director of the Atmospheric Monitoring Service said in a press release, he said that the ozone hole of 2020 is similar to that of 2018, which was also a very large hole, and it certainly has been at the top for the past fifteen years.

With the return of sunlight to Antarctica on September 23, 2020, and there has been a continued depletion of the ozone layer over the region, the smallest hole for the ozone layer was unusually and short-lived in 2019.

What do we mean by the return of sunlight (midnight sun)?

The sun remains rising in the South Pole between September 23 to March 20, that is, at the spring equinox, the midnight sun is generated from the tilt of the Earth's axis in one direction during the rotation of the earth around the sun, so one pole tilts toward the sun for six months, while the other tilts About the sun that also rotates on its axis. This movement causes the sun to rise and set at regular intervals, causing night and day throughout the earth .

And this year we're recording a fairly large hole again, underscoring that we need to continue to enforce the Montreal Protocol that bans emissions of ozone-depleting chemicals.

What is the Montreal Protocol?

Emissions of ozone-depleting chemicals are prohibited, since the ban on halogenated carbon compounds, the ozone layer has slowly begun to recover; The data clearly shows a trend towards a diminishing area of the ozone hole .

The latest Scientific Assessment of Ozone Depletion by the World Meteorological Organization and the United Nations Environment Program was released in 2018, indicating that the ozone layer is on the path to recovery and a possible return of ozone values over Antarctica to pre-1980 levels by 2060 .

The ozone hole over the largest and deepest Antarctica in 2020

The Great Ozone Hole in 2020 caused a strong, stable and cold polar vortex, which helped keep the temperature of the ozone layer over Antarctica constantly cool.

Ozone depletion is directly related to the temperature in the stratosphere, the atmospheric layer between about 10 km and 50 km almost, because the clouds polar which have a very important role in the chemical destruction of ozone, only formed at temperatures below -78 ° C.

These clouds in the polar stratosphere contain ice crystals that can convert non-reactive compounds into reactive compounds, which can then rapidly destroy ozone once sunlight becomes available to start chemical reactions. It was observed that solar radiation was the main reason behind seeing the ozone hole only in late Winter / early spring .

There is also a decrease in ozone concentrations in the stratosphere to near zero values over Antarctica at altitudes ranging from 20 to 25 km (50-100hPa) .

During the spring season in the Southern Hemisphere (August - October) the size of the ozone hole over the Antarctic increases, reaching its maximum between mid-September and mid-October, when the high temperatures in the stratosphere begin to rise in late spring in the hemisphere Southern Terrestrial, ozone depletion slows, the polar vortex weakens and finally disintegrates, and by the end of December, ozone levels are back to normal .