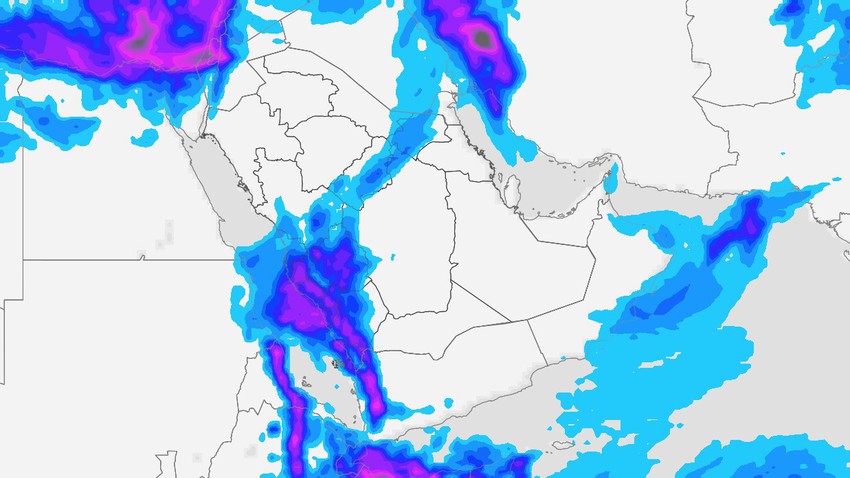 Arab Weather - Thunderstorm clouds began to multiply in the southern Red Sea on Wednesday morning, with the beginning of the development of a state of widespread air instability, which was called "Suqia", where during the coming hours, i.e. with the hours of afternoon and Wednesday evening, cumulonimbus thunder clouds arise over the middle The Red Sea off the coast of Jeddah, before moving eastward and gradually becoming the city of Jeddah under thunderstorms.

Clear weather prevails on Wednesday in the city of Jeddah, which is a temporary stability in the weather before the rainy "Suqia" situation begins to develop and widen on the night of Wednesday / Thursday, as the chances of thunderstorms raining on the city of Jeddah at night, before it intensifies on Thursday.

Heavy thunderstorms on Jeddah Thursday, and a flash alert

The cold air front that causes the state of air instability begins by crossing the city of Jeddah on Thursday morning, when thunderstorms become more intense, longer and more widespread, and unstable atmospheres reach their climax over the city on Thursday noon and afternoon, where during this period there is an opportunity to form torrents and a high level Water is high.

The map represents the accumulation of rain from Wednesday to Thursday evening, according to the American model.

Significant decrease in heat after crossing the cold front

Cloud cover, precipitation and hail also reduce temperatures during the passage of effective thunderstorms, as well as activity in the speed of downward winds associated with thunderstorms.

Gradual stability in the weather in Jeddah from Friday evening

The opportunity for thunderstorms remains available on Thursday night / Friday and Friday, but with less intensity than on Thursday, and with the cold air front moving away from the city of Jeddah and the lowering of surface temperatures, the weather is expected to return to stability as of Friday / Saturday night.