Saudi destinations and cities for lovers of cold weather in winter 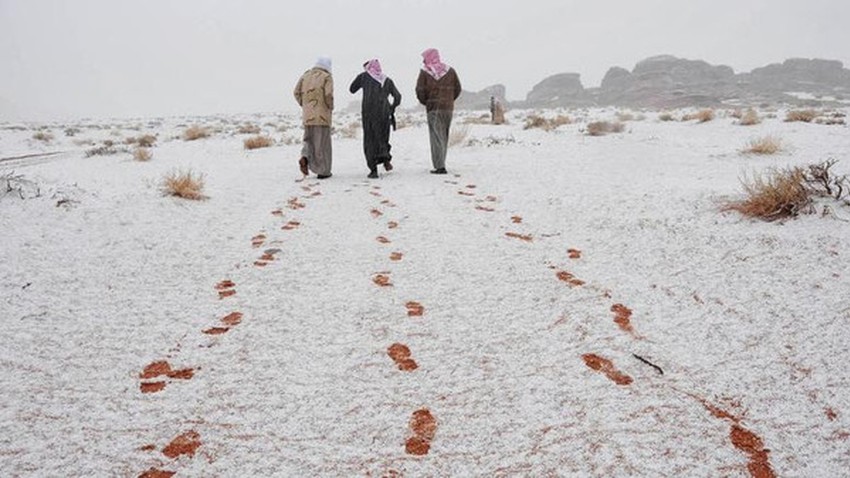 Arab Weather - The Kingdom of Saudi Arabia varies in its topography and climate, making it a distinct destination for winter tourism, as the warmth on the western coasts, the breezes of the eastern beaches, the glow of Mount Twaiq in the middle, the magic of the Farasan Islands and the beauty of the clouds on the Al-Souda Mountains in the south, in addition to the white snow of Mount Almond in the north And far from the warm sun of the kingdom, and although snow is considered rare in Saudi Arabia, there are places in Saudi Arabia that experience snow and biting cold during the winter months, and here are 7 Saudi cities for those who love cold weather in winter :

The city of Hail is located in northwestern Saudi Arabia, and the city is famous for its agricultural production, especially fruits, grains and dates. Hail is considered one of the coldest cities in winter, where temperatures drop to 2 degrees below zero degrees Celsius.

Tarif is located in the northern suburbs of the Kingdom of Saudi Arabia near the Jordanian border, and it is one of the cold cities that record freezing temperatures in the winter, as temperatures drop to zero degrees Celsius, and Tarif recorded a record for the lowest temperature recorded in the Kingdom, which reached -12 ° C.

Rafha is located in the north of Saudi Arabia, near the Iraqi border, and the highest temperature in the city is about 49 degrees Celsius in the summer, despite this, it is one of the cities that witness a decrease in temperature so that the temperatures during the winter touch 0 degrees Celsius and may witness snowfall .

Tabuk is one of the cities of Saudi Arabia, which is located in the northwest of the Kingdom, near the Jordanian border, and the city of Tabuk has witnessed snowfall in many years during the winter season, and it is one of the cold cities where temperatures can drop in cold winter days to zero degrees Jabal al-Lawz is considered one of the most famous places where snow falls in Tabuk.

The city of Sakaka is located in the northwestern part of the Kingdom of Saudi Arabia, in Al-Jawf Governorate, north of the Nafud desert. Despite this, temperatures drop to nearly zero degrees Celsius.

The city of Arar is located in the north of Saudi Arabia near Iraq, and Arar is famous for raising livestock and camels, although it is one of the cold regions in the winter, where temperatures drop to 1 ° C

The city of Abha follows the Asir region in the southwest of the Kingdom, near the Red Sea, and the city is famous for the rocky heights of the Asir National Park, which is home to birds and the thick hanging trees, and the summit of Mount Souda, and the city of Abha is known for its coldness during the winter season, as temperatures drop to About 2 degrees Celsius.

The city is also famous for the Corniche Al Ghoum, which is 27 km from the city center