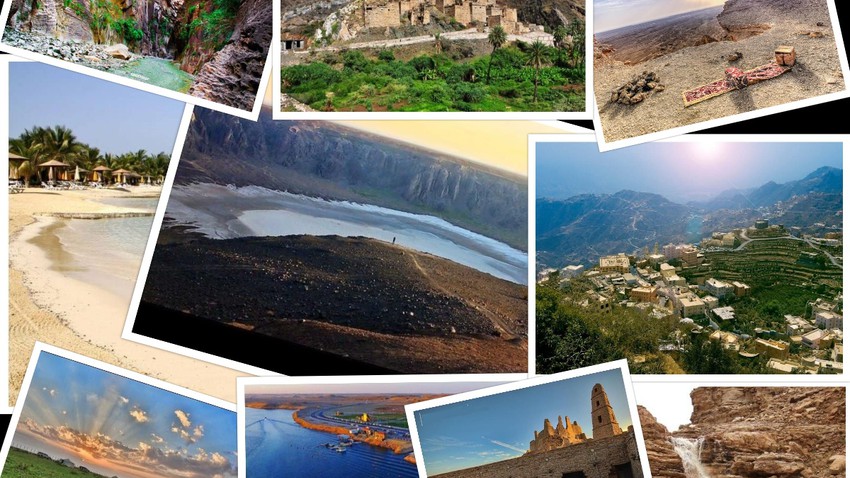 Wadi Lajab witnesses a large number of visitors from inside and outside the region throughout the year. It is a headache and refraction that dates back to the era of African refraction in the eastern part of “Al-Qahr Zahwan” mountain of Al-Raith Governorate, which is located in the north-east of Jizan city, about 150 km.
When you visit Wadi Lajab, you will notice the clear distinction between the neighboring mountains in terms of shape, hardness, rock composition, and color.
And 2 kilometers from the entrance to the valley, you can leave the car inside the valley due to the narrowness of the lane and enjoy walking amid the spray of water flying from the waterfalls and lakes that extend along the valley. Its height reaches more than 30 meters, and its roots extend to reach the water stream below.
⦁ Sharm Obhur - Jeddah

It is called the Bride of the Red Sea, and it is located on the eastern side of the Red Sea, west of the Kingdom of Saudi Arabia, at a distance of 30 to 39 km, with a length of about 11 km and a width of 300 to 500 meters.
If your goal is to get away from the routine and daily pressures and enjoy entertainment and recreation, this beach may be characterized by the calm that pervades the place as it is far from the urban range, and the cool fresh air that softens the atmosphere, and the warm sea water, and also provides all tourist services, and various activities such as: swimming, snorkeling, And sunbathing, yacht trips, boats, marine tank races, resorts, hotels, and lined sessions along the beach. Not forgetting the completion of the magnificent sunset at this beach.
⦁ Wadi Al-Tuqi - Riyadh

It is one of the important places in the capital, Riyadh, which is about 88 km away. Where the Saudis are proud of this valley, which is considered the longest valley, which is interspersed with the beautiful nature of rocks, waterfalls, and trees, especially acacia trees.
It is preferable to visit it at the time of spring and rain, and it is preferable to go by a four-wheel drive vehicle such as a jeep and others, due to the presence of wet muddy areas that can be a trap for cars, so care must be taken there.
⦁ Al-Tanthat Gardens - Al-Tanthat Kindergarten

It is located in the city of Riyadh, and is considered one of the largest kindergartens. It is suitable for family gatherings, as it is a perfect spring destination, in which different types of trees and flowers appear, such as acacia and chestnut.
⦁ Dumat Al-Jandal - Al-Jawf

This tourist destination is located in the north of Saudi Arabia, and includes the most important archaeological sites dating back to the Islamic civilization, such as the Omar Ibn Al-Khattab Mosque, whose minaret is considered the first minaret in Islam. There are archaeological areas, such as the archaeological shield neighborhood, which is characterized by mud houses, and stone-paved paths that fascinate everyone who sees them.

It was mentioned in the Assyrian sources that Dumat al-Jandal dates back to the seventh and eighth centuries BC, which is considered one of the oldest places inhabited by man. After the advent of Islam, this region was opened by Muslims in the year 5 AH.
⦁ Fifa Mountains (Al-Fifa) Jazan

These mountains are located 100 km east of Jizan city. It is more than 1800 km above the earth's surface. It is a group of mountains wrapped around each other, and it is one of the most beautiful views that you can enjoy in Saudi Arabia, especially if you are a fan of adventures and mountain climbing. At first glance, it may appear to you as a pyramid of mountains, and this is what will push you more to explore its beauty. This area is characterized by a mountainous character, as it is cold in winter and moderate in summer.
This area includes a group of old houses, cylindrical in shape, on mountain terraces in the agricultural province of Fifa. The people of the region estimate the number of these terraces in the millions, which extend from the valley to the summit, and they keep their blow from erosion because they are fertile agriculturally.
The people of the region depend on the cultivation of aromatic trees, all kinds of grains, pomegranate, grapes, cream, cocoa, yogurt, guava, tamarind, and many fruits and vegetables, in addition to beekeeping and the production of honey of all kinds.
When you visit the Utilitarian Market, which is the first market to be held in the governorate, you will find a heritage that still preserves its character, simplicity and exhibits from the ancient mountain heritage. As for the modern Haqou Fifa market, you will see a group of events and activities that are held on holidays and occasions in that province.
⦁ Al-Wa'bah Crater - Taif

This crater is located 250 km from Taif. The Al-Wahbah crater is also named after the Tamiya quarry; Relative to Mount Tamiya of the same shape. This area is characterized by ancient volcanic activity, which led to underground eruptions, generated by the contact of molten rocks with groundwater.
You may be prepared when you see these two areas, because the meteor has fallen in them due to their strange shape, but this is not the case. The crater is four kilometers wide and 250 meters deep, and in its heart there is a lake
Its true magic lies in the splendid view from above, where you can see the sodium phosphate crystals that create a shimmering crust visible from the sky. This salt rug turns into a pearl lake when rain gathers in its hollow.
If you are a fan of adventures, we recommend you to explore this volcanic crater similar to the moon. And passing it to witness the amazing natural wonders in and around the region.
There are a number of tips that we offer you before visiting this area, which are:
⦁ It is recommended to use good climbing shoes when planning to go down the hole.
⦁ It is recommended to climb during the morning and during the cold winter months.
⦁ You can visit the lava fields at the northern end of the crater by car, it is only 10 minutes away.

⦁ Edge of the World - Riyadh

Or what's called a bulge. It is 90 km from the capital, and it is one of the most beautiful Saudi landmarks, where the steep rocky slope overlooks a large valley, which seems to have no end, which gave it the name of the edge of the world. It is part of the vast slopes extending for more than 600 kilometers in the center of the Kingdom, where this region is frequented by lovers of exceptional destinations and lovers of high places. Although it is little known, it is worth seeing, especially in the fall or winter. It is advised not to visit it in the summer; This is due to its very hot weather.
The reference is estimated to 50 million years ago, this place was a large seabed that covered the Arabian Peninsula until the Levant.

The Ain village is located 20 km from the city of Al-Baha. Its chronological history dates back to the end of the tenth century AH - the eighth century AD - making it more than 400 years old, according to the UNESCO website.
It is one of the most beautiful archaeological sites in the Kingdom of Saudi Arabia. It is described as a heritage area dating back hundreds of years. Its beauty lies in the way it is built with stones roofed with juniper trees and its balconies are decorated with quartz stones in the form of compact triangles. As for its vast farms, it has not stopped for a long time.
What the visitor sees in Dhi Ain is the beauty of its geographical location, as it is considered one of the best heritage villages in the region. This is for basic considerations, the most important of which are: the security aspect and the economic aspect. From the security aspect, the village’s natural location helped to secure three sides, “Northern, Eastern, and Southern,” with high and rugged heights that protect it from any attack, and from an economic point of view, it provided fresh and flowing water to the running eye, diversifying agricultural crops.
This village appears harmonious with its buildings, as its 58 palaces were built of stone, on a mountain of white marrow, containing a waterfall that springs from Al-Ain Al-Athba. It smells like a fragrant caddy, wafting from the farms.
As for the generosity of its people, they are racing to welcome their visitors and hospitality.
⦁ Nora Gardens - Nora Kindergarten

It is located in the north of Riyadh. It is characterized by its picturesque natural atmosphere, which attracts large numbers of hikers in the spring season, as it is full of nature that delights the onlookers.