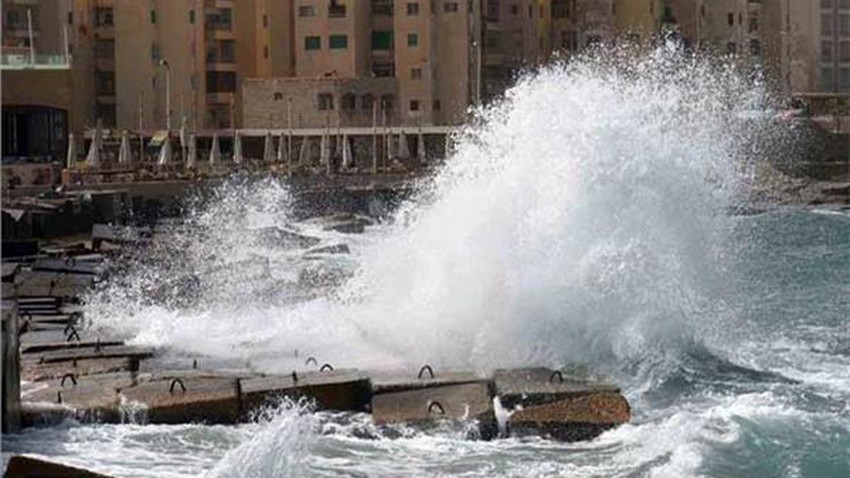 Weather of Arabia - Alexandria is among the most famous cities in the Arab Republic of Egypt, as it is located on the coast of the Mediterranean Sea. It is bordered by the sea from the north by a distance of 45 km, and this makes the climate in Alexandria an exceptional case, as the coastal governorate is famous for the winter seasons that blow annually.

Alexandria is the only governorate that is exposed to these nuclei, and it comes every year with specific dates that may be delayed or advanced by a few days, but they remain constant. The fishermen in Alexandria named these nuclei, so that the name of each nucleus is associated with the most important characteristic of it.

The Nawat season begins in Alexandria after the end of the fall season, with the broom-broom blowing in mid-November , and it lasts 4 days .

The reason for the name: the intensity of the winds, as northwesterly winds blowing “sweep” the sea in relation to the strong sea currents witnessed by the sea during that nucleus.

Then comes the "rest of the broom" nucleus, which lasts 4 days as well, and southwesterly winds blow over Alexandria this time with severe storms.

2. Nawat Qassem..one of the most dangerous nuclei

The reason for the name: In relation to one of the sons of the fishermen, called Qasim, who was drowned in that nucleus, which led to his name being given to it.

3. The nucleus of the smallest silver nucleus

The nucleus of the minor flood begins in Alexandria in the last half of December and lasts for 5 days, during which northwest winds blow over Alexandria, accompanied by rain.

The reason for the name: Because the sea overflows through it and the waves rise, which prevents practicing the fishing profession during it, due to the danger of the waves on the stability of fishing boats.

The Christmas season lasts for two days and Alexandria is blown by westerly winds, and it is characterized by being very rainy.

The reason for the name: It was called by this name because it blows over Alexandria in conjunction with the Coptic Christmas.

The nucleus of the New Year is called by this name because it blows over Alexandria at the beginning of the new year every year in the month of January and lasts for 4 days, during which westerly winds blow over Alexandria and it is rainy.

6. The nucleus of the great silver

The great flood begins in Alexandria in the first half of January , and the major flood continues for 6 days, during which heavy rainy southwesterly winds blow.

The reason for the name: It was called by this name because it makes the sea overflow and the waves rise severely, which makes it difficult to practice the fishing profession.

9. The nucleus of generosity

Nawat al-Karm blows over Alexandria in the last days of January, and it lasts for 7 days . That is why it is called Nawat al-Karm, because it is generous in its rains and the length of its continuity, and the practice of fishing during it stops due to the western winds and heavy rains.

10. The little nucleus of the sun

The small core of the sun lasts only 3 days and is called by this name because the sun remains shining even in periods of rain, and it blows over Alexandria in the middle of February, accompanied by westerly winds and very rainy.

The nucleus of Salloum blows over Alexandria in early March and lasts for two days only , during which southwest winds accompanied by rain blow over Alexandria.

Nawah Al-Hasum is one of the most intense nuclei that blows on the bride of the Mediterranean. It blows in the first week of March. It was called by this name due to its intensity and because it is characterized by severe lightning and thunder and rainfall. It is considered the last of the severe rainy nuclei that blows on Alexandria.

13. The big core of the sun.. winds without rain

The sun is large and lasts for two days, and east winds blow over Alexandria, but it is not rainy.

The Khamaseen wind, which blows over Alexandria in the last week of April and lasts for two days, is characterized by being hot, as hot easterly winds blow over Alexandria, sometimes laden with dust and sand.

16. The Dot Winds Nuwa... A Continuation of Hot Winds

17. The nucleus of the "Cross" or "the washing of dates"... reminds us of the approaching winter

The nucleus of the Crusader winds blows over Alexandria in the latter half of October and lasts for 3 days, during which westerly winds blow over the governorate, often without rain. However, during the year 2015, Alexandria witnessed heavy rain, which caused Alexandria to sink and paralyze traffic.

TV Intervention - Ammon | The date of the start of snowfall, the peak time, and recommendations for dealing with the weather situation with Muhammad Al-Shaker

TV Intervention - Roya | Updates of the air depression and the events that began to affect the Kingdom's atmosphere with Dr. Ayman Sawalha