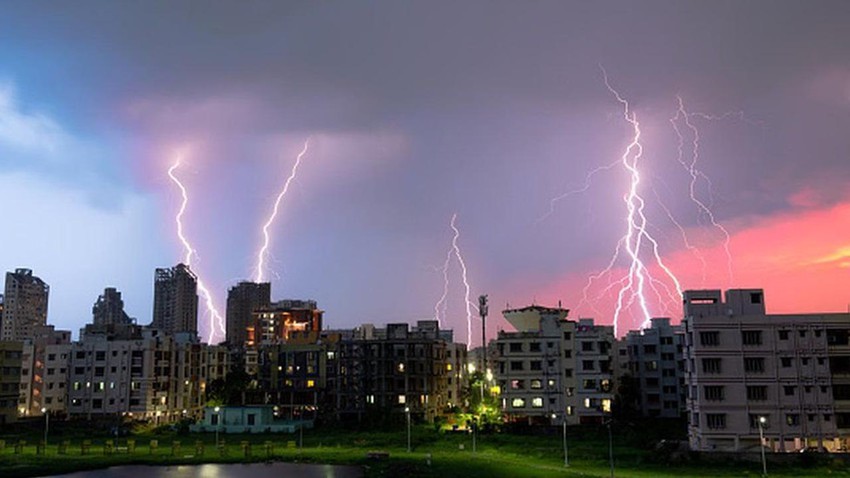 Weather of Arabia - Dangerous weather conditions in northern India have killed at least 36 people during the past 24 hours, including 12 people who were struck by lightning.

Muhammad Othman, 15, was on the roof of his friend's house in Prayagraj when lightning struck Friday evening, killing him instantly, while his friend Aznan was injured and is receiving treatment in hospital.

Officials said 39 people have died from lightning in the past five days, prompting authorities to issue new guidelines advising people how to protect themselves during thunderstorms.

More: The dangers of lightning strikes..and ways to protect against them

Lightning strikes are common during the monsoon season in India, which runs from June to September.

Colonel Sanjay Srivastava, whose organization Resilient India Lightning Campaign works with the Indian Meteorological Department, said deforestation, pollution and depletion of water bodies all contributed to the collapse of the climate, which led to more lightning.

Watch also: Lightning strikes a security guard in Indonesia in a breathtaking scene, but he miraculously survives..Video

Global warming has increased the frequency of lightning, said Sunita Naren, director general of the Center for Science and the Environment. With a 1 degree Celsius temperature increase, lightning increases 12 times.

There has been a 34% rise in lightning strikes across India over the past year, causing deaths to jump. Srivastava said India recorded 1,489 deaths due to lightning in 2016, compared to 2,869 in 2021.

See also: What is the secret of the reverse lightning that came out of the clock tower in Makkah Al-Mukarramah towards the sky?