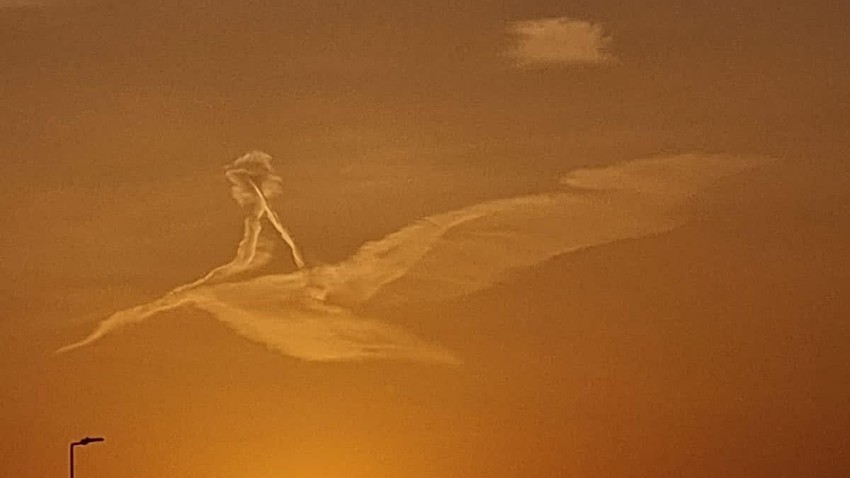 Weather of Arabia - A picture taken at the moment of sunset over the Saudi capital, Riyadh, occupied many Saudis on social media, where the shot showed a cloud formed in the form of a child that seemed to be sitting on the back of a bird, flying together in the sky.

Video of the same scene pic.twitter.com/FbwKbJLtsc

While the owner of the photo, Abdul Karim Al-Majed, explained that he took this photo, as well as video clips, when he was in his car on Qassim Road, on his way to vacation in Thadiq Governorate.

Experts in Arab weather explain the type of this cloud, which belongs to the feather clouds (Cirrus clouds), which are thin clouds that appear at high altitudes in the atmosphere (approximately 10-12 km above sea level), so they consist of ice crystals.

This type of cloud can appear in many forms, and it does not pose any possibility of precipitation, as it usually appears when the sky is sunny.

According to experts in Arab weather, this cloud that was seen in the last hours of the afternoon in the sky of the road extending between Riyadh and Qassim in the form of a child sitting on the back of a bird, was formed from the remnants of the nebulae of the Arabian Sea in the high layers of the atmosphere, which reached the Qassim region with the eastern winds.

What is the scientific explanation for seeing a familiar sight in the form of a cloud?

The reason we see animals and people's faces in clouds is a phenomenon called "Pareidolia", which is a visual projection that occurs as a byproduct of the strange way we process visual information, but it is not limited to clouds, many people see strange things such as faces , animals in other materials such as tiles, wall cracks, tree branches and even coffee grounds.

For more: Why do we sometimes see in the shapes of clouds images of animals and human faces?!