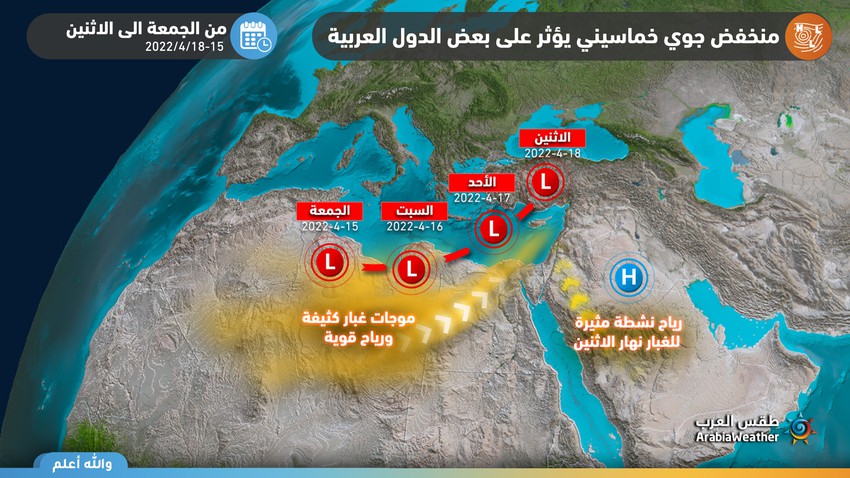 Arab weather - m. Nasser Haddad - The latest forecasts indicate the deepening of the five-year depression in southern Tunisia and its movement towards Libya, accompanied by a large activity of dusty surface winds in some areas, and it is expected that it will continue its movement towards the northeast to affect various regions of Libya and parts of Egypt and the Levant in the form of conditions. Five-year weather and a clear rise in temperatures with an increase in the proportion of dust in the atmosphere with varying severity.

Find out the expected weather and dust intensity

The Arab Weather Center expects that the air depression will be concentrated in northern Libya, which will lead to the control of densely dusty weather in the south, east, and possibly parts of northern Libya, in conjunction with the occurrence of major turbulence in the sea and high waves.

On Sunday, the air depression is centered between Greece and the island of Crete, and as a result, active winds and dust waves are transmitted to Egyptian lands with varying severity, according to forecasts issued by the Arab Regional Weather Center, including Cairo and Alexandria, and it is feared that the horizontal visibility will decrease and the maritime traffic in the coasts will be affected. The Mediterranean Sea, and a significant increase in temperatures is expected, especially in the Levant.

The depression is moving towards Turkey, which means that the five-year weather conditions will move to northwest Egypt, Sinai and the Levant, including Jordan, so the Arab weather expects that the dust levels will increase in the atmosphere in conjunction with the control of hot weather.