A hot summer start for the month of August.. A hot air mass is gradually approaching the Levant in the coming days 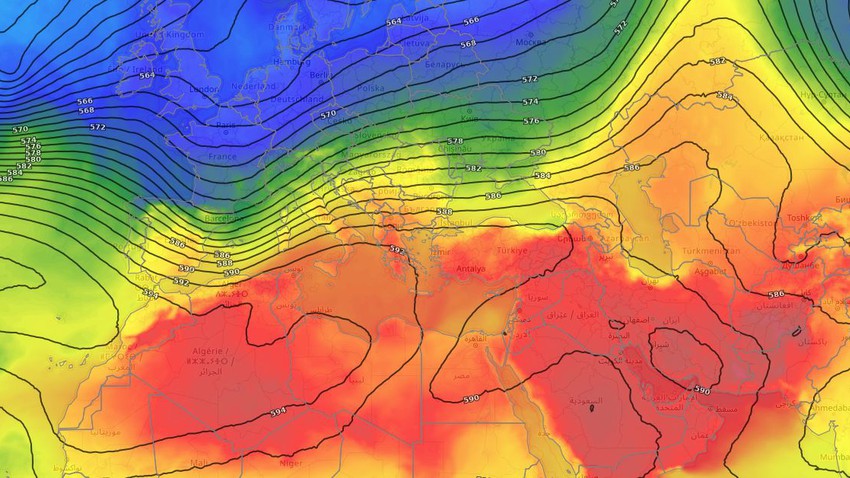 Weather of Arabia - The Levant, especially the western parts of it, has been experiencing temperatures around their normal rates during most of its days since the beginning of the summer, amid a complete absence of heat waves, at a time when the weather was moderate and humid on most nights of the month so far, this comes as a result of the distribution of weather systems Which is in the interest of the region, this atmosphere is expected to gradually decline in the coming days as a result of the approach of a hot air mass towards the region.

A hot air mass is gradually rushing towards the area

In the details, the latest computer modeling outputs indicate an expected gradual approach of a hot air mass centered over the desert of the Arabian Peninsula towards all regions of the Levant, which is working on a gradual rise in temperatures during the coming days, to reach its peak on Wednesday and Thursday, to be higher average for this time of year.

During daylight hours, relatively hot weather prevails in the mountainous heights on Mondays and Tuesdays, and turns hot as of Wednesday, while the weather is very hot in the lowlands and the Badia, so that temperatures are between 35-37 degrees Celsius in Many villages and cities of the Levant, including the capital Amman, Al-Quds Al-Sharif and Damascus, while it is more moderate in the coastal areas, especially Beirut.

When reviewing the expected temperatures in the capital, Al-Quds Al-Sharif, for example, for the next five days, it is expected that the temperatures will tend to rise gradually and ascend to reach the mid-thirties in the mountainous heights, while the temperature will be forty in the lowlands and the Badia regions, with very hot and exhausting weather prevailing in those areas.

Atmospheric dynamics in the distribution of air masses

The direct cause of the influence of the rest of the Levant by the hot air mass, as a result of a cold air mass rushing west of the European continent and accompanying an air depression in the upper layers of the atmosphere, as the nature of the atmosphere’s dynamics naturally depends on the distribution of cold and warm air masses across the North Pole, which is the main source of the region via roads. The dynamic, which is represented in the dominance of high air pressures over an area corresponding to low air pressures in another region, as with the rush of a cold air mass west of the old continent, which works to intensify the subtropical air altitude over the region and deepen the pressure values ​​in the thermal depressions on the Arabian Peninsula and sometimes approach them Towards the Levant to affect directly, and this is what is expected on Wednesday and Thursday, God willing.