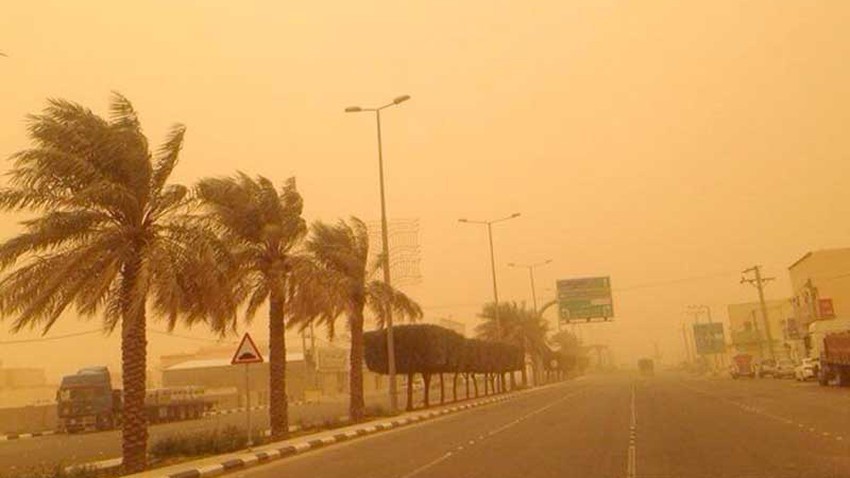 Weather of Arabia - The outputs of the analyzes and computer simulation data for weather forecasts indicate expectations of the movement of the five-year depression from Libyan lands, and taking a path inland from Egypt to Iraq through the Levant, and it is expected that this depression will impose significant weather fluctuations between a significant rise in temperatures followed by A noticeable decrease in temperature and dry and dusty weather in many areas, God willing.

According to the latest readings of the weather maps, the Khamasini depression is expected to affect many Arab countries, namely: Libya, Egypt, Jordan, Palestine, Lebanon, Syria, Iraq, Saudi Arabia and Kuwait, during the days of the Eid al-Fitr holiday, God willing. 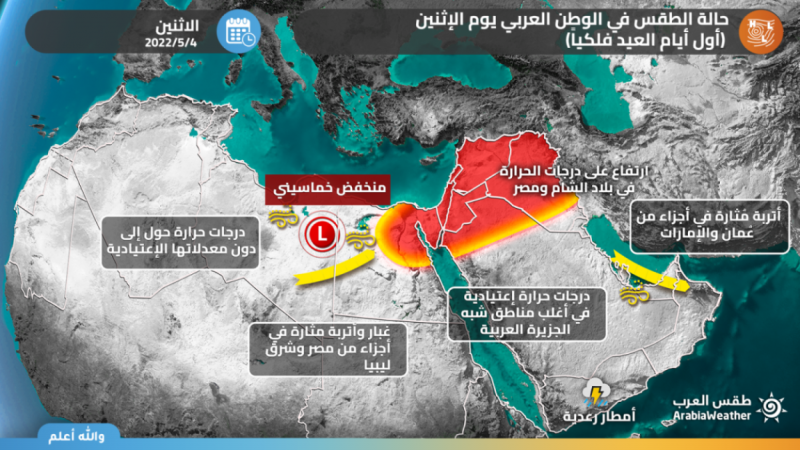 The same maps indicate that the Khamasini air depression will be stationed on Monday (the first astronomical day of Eid) in eastern Libyan territory, which leads to the control of densely dusty weather over southern, eastern, and possibly parts of northeastern Libya, coinciding with the occurrence of major turbulence at sea and high waves. As a result of this, dust waves will occur in western Egypt and a rise in temperatures throughout Egypt, the weather will turn to become hot. There is also a clear rise in temperatures in the Levant to become higher than their rates for this time of the year, and the weather turns to become warm over the mountains and hot in the rest of the regions.

The depression is moving towards the northwest of the Kingdom of Saudi Arabia, which means that the five-year weather conditions will move to Sinai, Palestine and Jordan, so it is expected that the proportion of dust in the atmosphere will increase in conjunction with the control of the relatively hot weather in all the main regions of the Levant. Intense sandstorms are expected on desert roads in the Kingdom of Jordan, including the road leading to Aqaba and the border crossings with Saudi Arabia. Temperatures are rising in northwest Saudi Arabia, with sandstorms expected in those areas.

The Khamasini air depression is centered to the east on Wednesday to center over Iraqi lands, and the winds turn to become westerly humid over the Levant and northern Egypt, thus lowering temperatures in all regions of the Levant and Egypt, God willing, and at the same time increasing temperatures in large parts of the east, central and north-east Saudi Arabia, Iraq and Kuwait, and the winds are active and raise dust and dust in parts of northern, central and northwestern Saudi Arabia, especially the areas of Tabuk.

Why are the pentagrams depressions formed at this time of the year?

The Khamsiniyah depressions are known as thermal depressions that usually form in the spring in the northern part of the continent of Africa (in the Sahara), and move parallel to the coast of the Mediterranean towards the eastern basin of the Mediterranean and the Levant region. Thermal depression is defined as a depression resulting from the intense heating of the Earth’s surface, which results in a decrease in the density of the air above it, so it rises up and the pressure decreases, and the air begins to gather from areas of high pressure towards areas of low pressure, and an upward movement is formed that is in a narrow vertical space.

The five-year depressions are formed in the Sahara and North Africa in this period of the year (the spring period) as a result of the decrease in atmospheric pressure due to the high temperature there compared to the temperature of the Mediterranean water, which becomes cold after the winter season. These depressions push the surface winds laden with dust from the Sahara desert towards the east.

The Khamasin depressions are usually accompanied by the Khamasin winds, which are mostly southwesterly winds, which are dry and warm and come from the Sahara Desert, loaded with tons of dust and raised dust, and move quickly towards areas of the eastern Mediterranean, such as Egypt, the Levant, Iraq, and the Arabian Peninsula region. Temperatures and dusty conditions will reduce visibility.

Kuwait: Stable and hot weather in all regions, the first day of winter according to meteorology