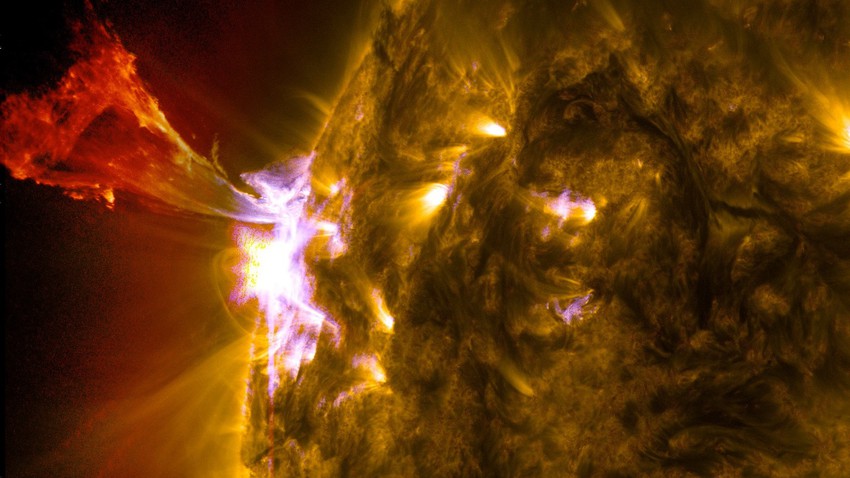 Weather of Arabia - NASA's Solar Dynamics Observatory, which continuously monitors the sun, picked up a massive solar flare on Thursday morning (October 28), which led to the release of a storm of charged particles into space that rushes directly towards Earth, and is expected to reach Earth by October 30 or 31.

The flare caused a strong, temporary dimming of radio waves across the entire South American continent, which just happened to be the central sunlit region of the planet at the time of the flare. But what happens when the charged particles reach the planet?

The effect of a solar storm of charged particles on Earth

On the plus side, storms of charged particles from the sun cause a stunning display of aurora borealis.

On the negative side, communications with satellites may be disrupted, as the storm affects the highest levels of the Earth’s atmosphere, affecting spacecraft around the Earth in low orbit, and particles can affect high-frequency communications such as air-to-ground communications, and even some Satellite-based services such as GPS, which may experience a drop in accuracy or disconnection.

However, the radiation is not strong enough to pass through the Earth's atmosphere, so humans on the planet's surface would not be harmed.

What is a solar flare? And how strong is it?

Solar flares are huge explosions of radiation that occur on the surface of the sun, and they are classified in strength according to the letter system:

Thursday's solar flare was of the type (X1) on the strength scale, which means that it is the least intense in the (X) category, where the (X) category indicates the most intense flares, while the number provides more information about its strength, as (X2) is the strongest. Twice than (X1), (X3) is three times stronger, and so on.

It is noteworthy that the sun is at the beginning of its current solar activity cycle, which lasts 11 years, as the current solar cycle began, in December 2019.