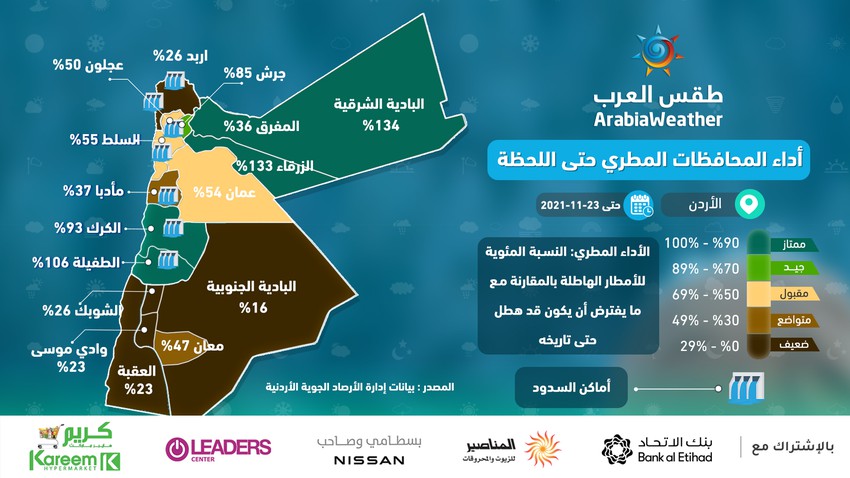 Arab Weather - The data of the Jordanian Meteorological Department showed that the percentage of what has been achieved from the season until now was only 6.4% , while the same data indicated that the performance of the rainy season did not exceed 59% compared to the amounts of rain that are supposed to be falling for this time of the year. Where it is assumed that this percentage in normal conditions is more than 90%.

These data and values indicate an acceptable rain performance since the beginning of this fall, but it is not good in light of the concern about the water situation in Jordan and the region.

The following is a new report issued by the Arab Weather Center diagnosing the rainy situation in Jordan:

First: The amount of rainfall achieved relative to what is assumed until (22-11-2021)

The statistical report on rain shows that most regions of the Kingdom are recording an acceptable rain performance until now, when comparing what has been achieved from the actual amount of rain that falls in this rainy season with what is supposed to fall (which is calculated based on what was recorded on the ground during the past thirty years) , we find that no region has exceeded the assumed rainfall total, and that some regions of the Kingdom suffer from great scarcity of rain and poor rain performance, namely: Irbid, the Southern Badia, Shobak, Wadi Musa and Aqaba. 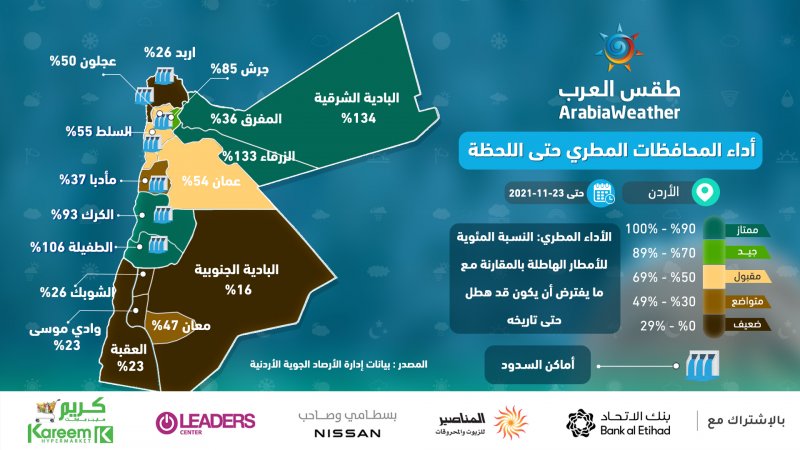 In a positive matter, specialists in Arab weather confirm that the final total of the rainy season does not depend on the rain falling only during the autumn season, and that there are many seasons in which the fall did not witness any good rain, while the final rain totals for the season ended with rain amounts around or above the seasonal rates. .

Second: A large variation in rain performance among the governorates of the Kingdom

Third: The reason for the great disparity in rain performance among the governorates of the Kingdom

Rather, the air system that affected the Kingdom was a state of atmospheric instability characterized by random and geographical irregularities in thunderstorms, and the same matter did not prevent heavy rains in some parts of the Kingdom.

Fourth: Forecasts for the rest of November

And the monthly bulletin for the month of November 2021, issued earlier by the Arab Weather Center, stated that the weather in November will be characterized by the following: