A regional cold bloc affecting many countries in the Middle East, as of Thursday 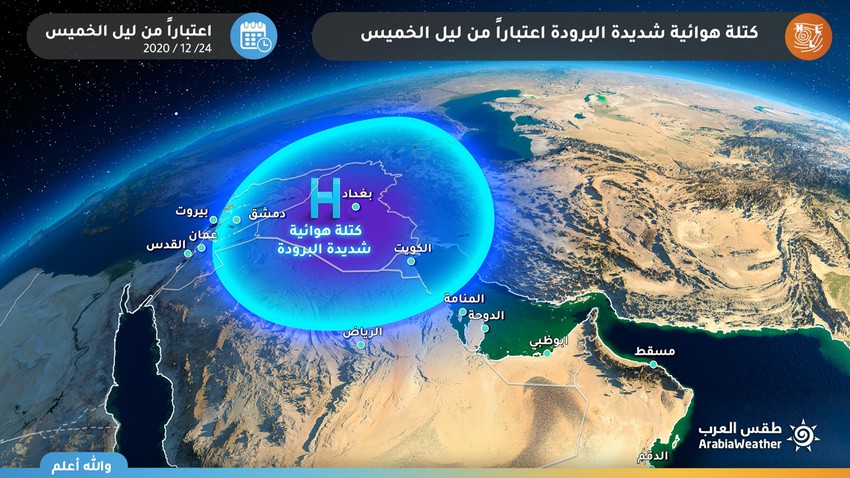 Weather of Arabia - It seems that the Siberian air rise is strongly returning to the Middle East region, this is what air maps indicate for the near future, as this air height will expand and extend as a result of the exposure of large areas of Turkey, northern Iraq, Iran and the Caucasus countries to snowfall during the past two days, I worked to cover Large lands with snow, and this is what will eventually form a very cold air mass in the lower air layers and the emergence of an air system with high air pressure, which is known as the Siberian High Altitude, which extends over the snow-covered lands in Central Asia to the Middle East.

The first Arab countries to receive this cold air mass will be Iraq and Syria, the two countries that will be affected by extremely cold and dry weather, as from Thursday / Friday night temperatures will drop to below zero degrees Celsius at night in northern Iraq and Syria and frost and ice will form there, provided that This cold bloc includes the rest of the International Countries during the day on Friday.

North of Saudi Arabia, Jordan, Lebanon and Palestine is the second station of the cold bloc mass

The Siberian air height continues to extend south and west, and the cold air mass extends with it, as temperatures decrease in northern Saudi Arabia on Friday, then followed by Jordan, Lebanon and Palestine on Friday / Saturday night, as the weather becomes very cold at night with great activity in the speed of the east and southeast winds that will increase Feeling cold.

With the continuation of the Siberian air height to the south and west, the effects of the cold mass reach Kuwait, eastern Saudi Arabia, and the central and northwestern regions of Saudi Arabia on Saturday, where temperatures drop, especially at night, and frost forms in the northern borders, Hafar Al-Batin and the northeast.

The effects of the cold air mass will continue for several days during the next week, and the eastern winds continue with them, which increase the feeling of coldness in the Levant and northern Saudi Arabia, and the southern dust causing dust in western Saudi Arabia.