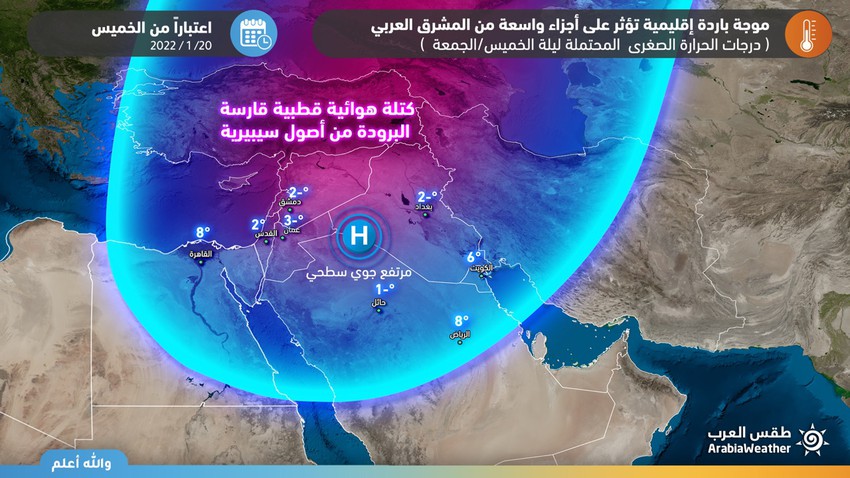 Arab Weather - The weather forecast staff at the Arab Weather Center monitored the control of a very cold air mass over several parts of the Middle East, and it is expected that it will secondarily affect some Arab countries during the coming days, God willing.

The minimum temperature in Baghdad is two degrees below zero Celsius

According to the computer simulation models that sense the movement of this block, the various numerical models indicate the movement of the center of the mass from the Levant to the Iraqi lands on Thursday 20/01/2022, and this does not mean that the rest of the regions of the region are immune to the effects of this block, but rather that the mass Polarity will continue to affect all regions of the Levant and Egypt, all the way to the Arabian Peninsula and some Arab Gulf states.

With the movement of the upper depression over Iraq's airspace, it is expected that the same very cold air mass will bring extensive snowfalls on the northern and eastern highlands of Iraq, and temperatures will drop to less than zero degrees Celsius in several parts of Iraq, including the capital, Baghdad.

Despite the movement of the center of the very cold air mass eastward to center over Iraqi lands, the direct effects of the same mass will continue on the Levant over the coming days, as the movement of the upper air depression to the east will be followed by the construction of a strong surface air altitude over Iraq and northern Arabia by the end of the week, which leads That, God willing, will lead to the blowing of very cold easterly winds towards most areas, God willing.

In light of this, the lowest temperatures continue around zero degrees Celsius or less in several areas of the Levant, and the tangible temperatures are very low, and the weather is clear and very cold in most areas at night amid fears of freezing in different parts of the country, and the winds will be east Moderate to active speed dramatically increases the sensation of freezing cold.

The lowest in the capitals, Riyadh and Kuwait, is about 6 degrees Celsius

As the Siberian high air continues to extend south and west, the effects of the very cold air mass reach Kuwait and Saudi Arabia at the end of the week, where temperatures drop, especially at night.

Indirect effects on Oman and the UAE

Indirect effects reach the Sultanate of Oman and the Emirates as a result of this mass, despite the geographical distance from it. The impact of this mass on both countries is in the form of a noticeably low temperature in the night hours, especially in the interior regions, and a remarkable activity in the speed of the western winds due to the huge differences in the Atmospheric pressure.

It is worth noting that the inland areas and those far from the sea are affected by the cold more than the coastal areas, and this is due, God willing, as a result of the large heat capacity of the water so that it cools slowly during the winter, unlike the dry land, which heats up quickly and cools quickly.

A million area occupied by the polar mass and more rushes towards the region, God willing!!

The polar bloc that affects the region occupies an area of one million, as this mass covers and affects Turkey, Iraq, Syria, Jordan, Palestine, Lebanon, Kuwait, large parts of Saudi Arabia, and western Iranian lands. If he compares it with other previous Arctic cold masses that rushed into our regions.

In view of the continued presence of an air mass over the eastern Atlantic Ocean and western Europe, and despite the long period of time, the numerical simulation indicators of the atmosphere show that the opportunity is ripe for more polar eruptions towards the region next week, the arrival of this polar air mass again to the region imposes on our country The continuation of the significant drop in temperatures and the occurrence of large-scale frost and ice waves, and the formation of new weather conditions and depressions, God willing.