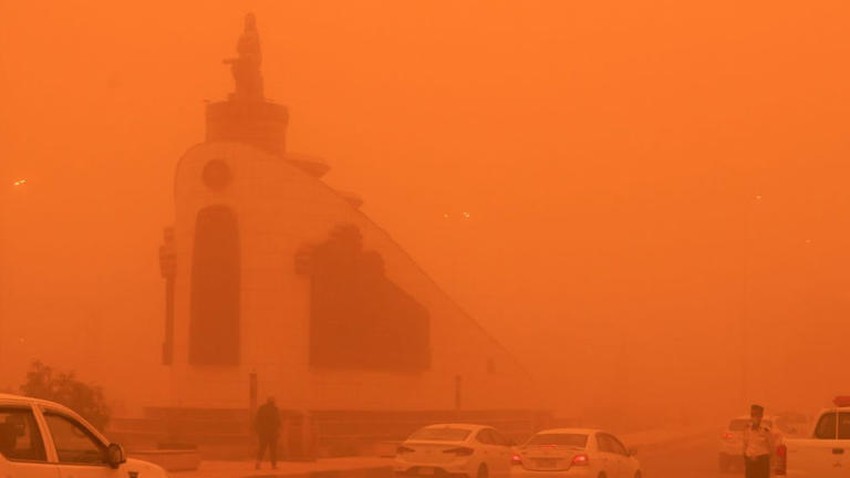 Weather of Arabia - Since Sunday evening, the huge dust storm has moved between several Arab countries in the Middle East, causing deaths and cases of suffocation, in addition to confusion and disruption in the aspects of life, so how did the dust storm begin and how did it affect the Arab countries?

Cause of dust storm

The dust storm started when a cold air mass in the upper atmosphere rushed towards the east of the European continent, blowing strong northwesterly winds accompanied by strong gusts that touched the 100 km/hour barrier over eastern Syrian territory.

Because of the disintegration of the soil resulting from the lack of rainfall, a huge sandstorm formed in Deir Ezzor, eastern Syria, on the evening and night of Sunday (15 May), and moved with the northwest winds to all regions of Iraq and Kuwait at dawn and Monday.

The storm continued on Tuesday towards eastern and central Saudi Arabia, and later to Qatar, Bahrain and some coastal and interior areas of the Emirates.

Syria: deaths and hundreds of cases of suffocation

Syrian medical sources reported the death of 10 people (most of them in Deir ez-Zor governorate, including three children) and hundreds of cases of suffocation, as a result of the dust storm that hit northeastern Syria, including the governorates of Deir ez-Zor, Raqqa and Hasaka on Sunday night.

The sources confirmed that hospitals and medical centers in all regions of eastern Syria received more than 500 injuries, and that hundreds of those who were exposed to health and respiratory crises could not reach due to road cuts due to the dust storm that continued until the early hours of Sunday morning.

The dust storm also caused significant material damage to agricultural crops, especially wheat, barley and cotton. It led to the collapse of the walls of houses in the cities of Raqqa and Deir ez-Zor, and the collapse of electricity towers in Al-Hasakah Governorate.

Electricity was cut off in Al-Hasakah governorate due to strong winds, which damaged the main line that feeds the cities and countryside of the governorate.

Iraq: Confusion and disruption of life

On Monday (May 16) a new dust storm swept through Iraq, the eighth of its kind since mid-April to hit Iraq, which suffers from severe desertification and drought, and a lack of rain affected by climate change.

The sky of the capital, Baghdad, was covered with a thick cloud of dust, and the city was covered in orange dust, along with other Iraqi cities, including Najaf in the south, and Sulaymaniyah in the north, and the roofs of buildings and cars across the country were covered with orange dust, which also found its way into homes.

Visibility was reduced to only 300 meters at Baghdad airport, forcing the authorities to close the airspace, suspend flights, and close airports in Najaf and Sulaymaniyah as well.

The Iraqi authorities ordered in seven of the total 18 governorates the closure of government offices, as movement became impossible due to the severe dust storm that struck the country, and schools across Iraq closed their doors, and exams for the second semester were postponed to Tuesday, whether in schools or universities, and health units remained in All over Iraq receive hundreds of cases of suffocation.

Saudi Arabia: a state of confusion and a dusty atmosphere in the eastern and central regions

Many regions of Saudi Arabia were affected by a wave of thick dust, which included major cities such as Dammam and Riyadh, which led to a decrease in the extent of horizontal visibility. breathing and others.

The Ministry of Health has warned asthma patients, children, the elderly and heart patients, of the current dust storm in several regions, noting the need to follow preventive methods to avoid respiratory crises.

#sandstorm
The dust of #Hafar_Al-Batin now..we ask God for safety for all
Monitor: @thamershamary

Follow the path of the sandstorm via satellite through the link https://t.co/wePYmlA9yY pic.twitter.com/zBMvxZ4kF1

On Monday, the General Administration of Civil Aviation in the State of Kuwait announced the temporary suspension of air traffic at Kuwait International Airport due to the dusty situation that swept the country, provided that flight schedules are scheduled and return to normal air traffic at the airport as soon as visibility improves.

The Kuwaiti government also announced that it had suspended maritime traffic temporarily in 3 ports due to the dust storm, and the study in Kuwait was suspended on Tuesday due to bad weather conditions, after the country witnessed a severe dust storm that obscured the view of passersby.

The dust mass that reached Qatar and Bahrain at the last hours of Monday night led to a decrease in the range of horizontal visibility, with warnings to road users and land and sea-goers from strong winds and low horizontal visibility, with the need to adhere to the controls of safe driving with closing windows, maintaining an adequate safety distance and not practicing No marine activity during this period.

It also issued health warnings from the effects of dust and sandy winds, to ensure that people who suffer from allergic rhinitis and sinusitis, chronic respiratory diseases and eye diseases are not exposed to health problems.

Today, Tuesday, the UAE is affected by the mass of dust gradually, starting in the west and extending to the coastal and interior areas, and the dust gradually decreases tomorrow, Wednesday, with the continuation of the northwest winds that raise dust and dust and lead to a decrease in the horizontal visibility sometimes to less than 1000 meters sometimes on the islands and some coastal and interior areas Especially the western region, from 09:30 to 22:00 today, Tuesday 17/05/2022.