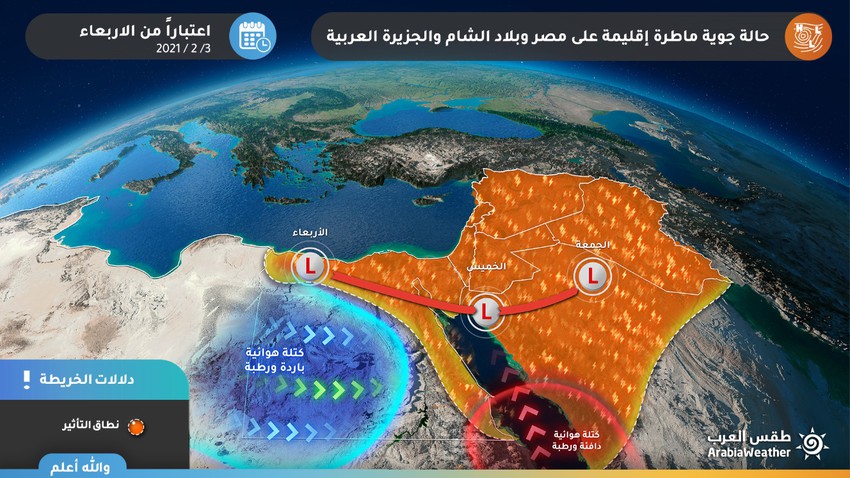 ArabiaWeather - Eng. Nasser Haddad - The eastern Mediterranean region will be on a date with a large-scale rainy weather situation that includes many Arab countries, namely: Egypt, Jordan, the State of Palestine, Lebanon, Syria, Iraq, Kuwait and Saudi Arabia, starting from Wednesday and during the next few days, God willing.

It is expected that the air turbulence will start on Wednesday in parts of northern and eastern Egypt, so that the event will move quickly on Thursday and include many Arab countries, namely: Jordan, Palestine, Lebanon, Syria, Iraq and parts of northern, western and central Saudi Arabia, God willing, and will arrive on Saturday towards Kuwait, while continuing with varying intensity On the rest of the countries.

These air disturbances come on a regional scale, due to the eruption of an air depression in the high air layers towards the eastern Mediterranean and northern Egypt, in conjunction with the blowing of warm and humid air currents from sub-tropical shows, which leads to the emergence of unstable weather conditions and a surface response to the Red Sea depression is clearly visible It is effective in both Egypt and the Levant, before turning into a frontal depression on Thursday and during Friday, when the weather is at its highest in the Kingdom of Saudi Arabia, and the intensity of thunder clouds increases and the intensity of rain.

The following is an overview of the impact of the weather situation in each country:

The air turbulence begins in the afternoon and evening of Wednesday in the Matrouh Governorate, to spread evening and night opportunities for sporadic rain towards Cairo, the Red Sea, Delta, Alexandria and Sinai, and the rains are weak to medium intensity and sometimes thunderstorm.

The rain intensifies on some of the northern coasts of Egypt, Sharm el-Sheikh and eastern Sinai after midnight and during dawn and Thursday morning, with the possibility of water bodies forming in those areas.

And the chances of sporadic rains continue at intervals until Saturday, when they recede completely, starting from western and central Egypt.

The Levant and includes Jordan, the State of Palestine, Lebanon and Syria

The chances of rain start on Wednesday evening and night and continue until Sunday, and the peak of the rainy situation is on Thursday, God willing, and during this period of time, it is expected that rain will fall in all regions of the Levant with varying intensity, and the rains will be heavy and thunderstorms that work to form torrents in different areas.

Snow is expected on Thursday over mountains that rise 2,500 meters above sea level, gradually falling to 2,000 meters, and concentrated in the highlands of Lebanon in the first place, extending towards the Qalamoun heights on Thursday evening and through Friday.

The rainy weather conditions begin on the Al-Qaim governorate on Thursday, and the rain clouds spread with the evening and night hours to most regions of Iraq, including the capital, Baghdad, and the rains are sometimes heavy. On Friday, the rainy weather will continue, and it includes the southern region, for example, and the rains will sometimes be heavy in parts of eastern and southern Iraq, such as the governorates of Diyala, Wasit, Maysan, Dhi Qar, Basra and Muthanna. The chances of rain are expected to gradually weaken on Sunday, bringing the situation to a complete end Monday morning.

Rain clouds start on the State of Kuwait on Friday night on its north and west, and the situation reaches its climax on the capital at dawn and Saturday morning, as showers of moderate intensity sometimes fall and form water bodies, and it is expected that the chances of rain showers will continue at intervals until Sunday.