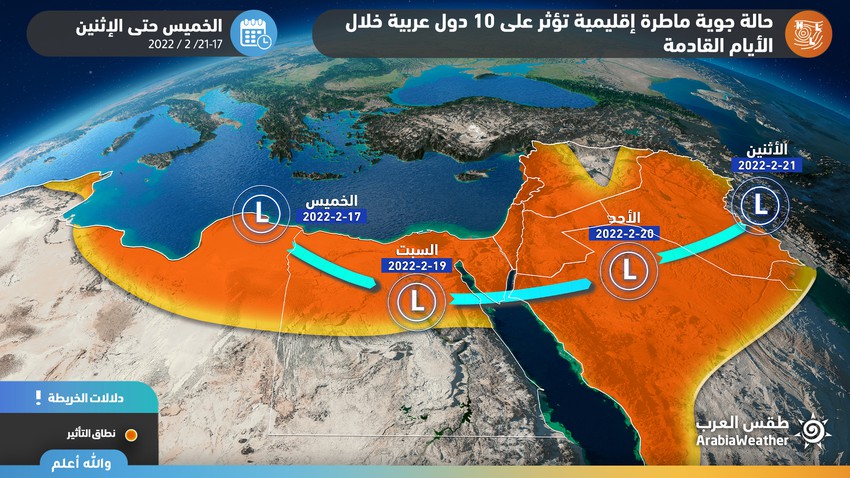 Weather of Arabia - The eastern Mediterranean region will be on a date with a large-scale rainy weather that includes many Arab countries: Tunisia, Libya, Egypt, Jordan, Palestine, Lebanon, Syria, Iraq, Kuwait and Saudi Arabia, starting from Wednesday and during the next few days, God willing.

It is expected that the weather disturbances will start on Wednesday on parts of the coasts of Tunisia, to move the activity quickly on Thursday and include the length of the Libyan coast and extend at intervals to some internal areas, provided that the rainy activity includes Egypt on Friday with its focus on northern Upper Egypt, while the air disturbances reach their peak The beginning of the week to include many Arab countries, namely: Jordan, Palestine, Lebanon, Syria and parts of north, west and central Saudi Arabia, God willing, and it will reach on Sunday towards Iraq and Kuwait, while continuing with varying severity over the rest of the countries.

These weather disturbances come on a regional scale, as a result of a low air rush in the high layers of the atmosphere towards the middle of the Mediterranean Sea and takes an unusual path inland from the Libyan and then Egyptian lands and continues its movement towards Saudi Arabia, in conjunction with the blowing of warm and humid air currents from semi-tropical shows, which This leads to the emergence of unstable weather conditions and a superficial response to the Red Sea depression, clearly and effectively in both Egypt and the Levant, before it turns into a frontal depression at the beginning of the week so that the weather situation is at its peak inside the Kingdom of Saudi Arabia, Iraq and Kuwait, to increase the intensity of clouds and the intensity of rain and be thunder Sometimes. 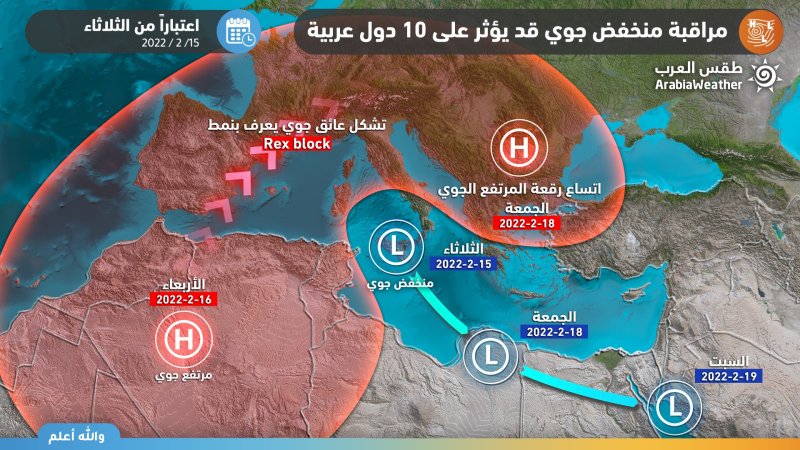 The following is an overview of the impact of the weather in each country:

Weather disturbances begin on Thursday evening in Matrouh governorate and the western coast, to spread on Friday to several parts of the west of the country, and gradually and towards the afternoon hours and Friday evening, the area of rain expands, to include the chances of scattered rain towards Greater Cairo, Lower Egypt and northern Upper Egypt, perhaps affecting parts of the coast. In the north, including Alexandria, the rains are generally moderate in intensity, interspersed with heavy clouds in some geographical areas, and it is not excluded that they will be thunder at times.

On Saturday, the intensity of rain will intensify in the northern regions of Upper Egypt and the northern Red Sea Governorate, to decline in the rest of the regions, and with the evening hours and the night of Saturday/Sunday, the chances of rain will focus on the entire regions of Sinai and the eastern coast, and perhaps parts of the delta, the cities of the Canal and the northern Red Sea Governorate, with the possibility of rain. Water gatherings form in those areas, and chances of rain continue at intervals until the late hours of Saturday morning, to recede completely soon after that in all regions.

The Levant, including Jordan, Palestine, Lebanon and Syria

Rain chances begin with the hours of Saturday morning gradually on the coastal areas of Syria and gradually extend during the daylight hours to most areas of Lebanon and the Palestinian coast in addition to the northern regions, provided that the area of rain precipitation expands with the hours of the afternoon and Saturday evening to include some interior regions of the Levant, especially the southern parts of it (Palestine and Jordan) The chances of rain will continue until Sunday, and the rain will be random and thundery at times.

Snow is expected on Saturday over the mountain peaks in Lebanon, and will extend towards the Qalamoun heights on Saturday evening, in addition to the summits of Jabal Al-Arab.

The first weather disturbances, God willing, begin on Saturday in random parts of western Saudi Arabia, to expand the rain area during the evening and night hours of Saturday/Sunday and include several parts of the north, central and western regions of the Kingdom, God willing. Some geographical areas, and it may be accompanied by thunder sometimes, with hail showers and surface wind activity during thunderstorms, with the possibility of water gatherings forming in some areas

On Sunday, the cold upper basin moves towards the east, so the cold air front crosses the northern and northwestern parts and parts of the middle to decrease temperatures significantly in those areas, and the chances of rain are concentrated on the northeastern areas that are adjacent to the Iraqi border and are sometimes accompanied by thunder. Chances of torrential rains rise in those areas, and northwesterly winds are also active, raising dust and dust, God willing.

Rain begins in the Kurdistan region on Friday, while Iraq is affected by the consequences of the depression starting from the hours of Sunday morning, so that rain clouds spread over large parts of Iraq, including the capital, Baghdad, and the rains are sometimes heavy, with an expected intensification in the intensity of rain clouds with the evening and night hours. Sunday / Monday, and this rain will be heavy at several intervals, with the possibility of water gatherings and perhaps torrential rain in some areas.

On Friday, the chances of rain recede from most areas, with rain clouds remaining over the eastern parts during the morning hours, and rain will be heavy sometimes, God willing. On the condition that the chances of rain gradually weaken on Sunday, to end the situation completely in the afternoon and evening hours.

Rainy clouds begin over the State of Kuwait in the evening and night of Sunday/Monday 20 February 2022, as the country crosses a cold air front, lowering temperatures, multiplying convective clouds, and increasing the chances of rain, God willing. May result in the formation of some water pools.