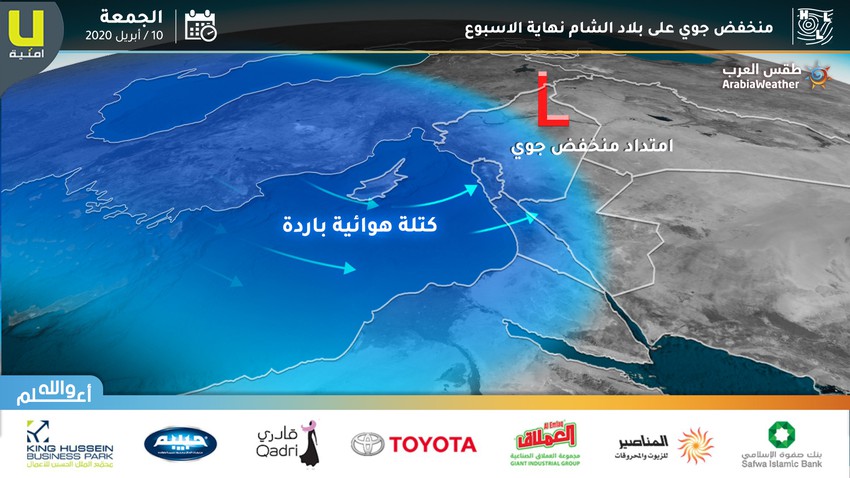 Weather of Arabia - With the will of God, it is expected that an elevated air impact will increase in all layers of air, on southern Europe and North Africa. A cold and humid air mass will flow from the Greek islands towards the eastern basin of the Mediterranean, and on Thursday evening a second-degree air depression will be formed, according to the classification The weather of the Arabs, due to the severity of the depression, will be taken from the west of the Syrian lands.

Therefore, the temperatures drop, in a further and tangible way, on Friday and Saturday, to fall below their normal rates for this time of the year, by 6-7 degrees.

Cold weather prevails in all regions, especially the mountainous ones, and gradually with the late morning hours and Friday afternoon, showers of rain will come, God willing, in parts of the north and central of the Kingdom, which are "thunderstorms" for brief periods with afternoon hours, and some rain showers may extend towards Karak and Tafila heights, as well as areas in the eastern Badia.

The wind will be moderate to energetic, windy, dust and dust in the east and south of the Kingdom.

When does the effect of the second-degree atmospheric depression end on the Kingdom?

The effect of this air depression on the Kingdom ends on Sunday, with a "significant" rise in temperature compared to Friday and Saturday, with it remaining just below normal levels, and a significant decline in wind speed.

Usually, the Kingdom’s influence is reduced by “mature and integrated characteristics” depressions on the aerial maps, with the beginning of the month of April, in favor of western Syria and Lebanon, as a result of the beginning of the weakness of the air system in the northern hemisphere, and therefore the effect of such an air depression on the Kingdom is considered unusual The occurrence, especially as we approached mid-April.

This depression may bring significant amounts of rain towards parts of the north and central of the Kingdom, which exceed the 30 millimeter barrier, God willing, to complete this distinguished rainy season.

Jordan Increasing heat rises and a slight chance of some rain ...

Wednesday Mild summer weather during the day and cold at night ...