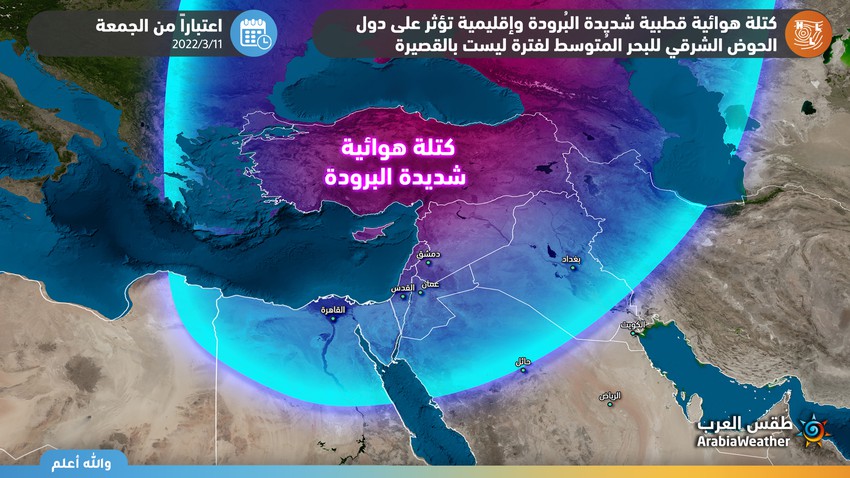 Arab Weather - From the operations room of the Regional Center "Arab Weather", the latest weather maps received from global centers indicate that a very cold and polar air mass of origin has been monitored, centered with its weight over the east and southeast of the old continent, and it is expected to directly affect the eastern region of the Mediterranean Sea. This will start from Friday 11-03-2022 to impose an atmosphere of deep winter borrowed from January in many regions.

According to computer simulation models that sense the movement of this mass, it is expected that this mass will be centered over Turkish lands and vary in place in those areas, as according to weather experts in the Turkish meteorological department, this expected mass is the strongest in 35 years during the month of March, and from It is expected that large sectors of Turkey will witness heavy snowfall, even to the coastal areas, and also to Istanbul , which is expected to witness significant snow accumulations. This does not mean that the rest of the regions of the region are immune from the effects of this bloc. Rather, the influence of the polar bloc will affect all regions of the Levant and Egypt, all the way to the north of the Arabian Peninsula. 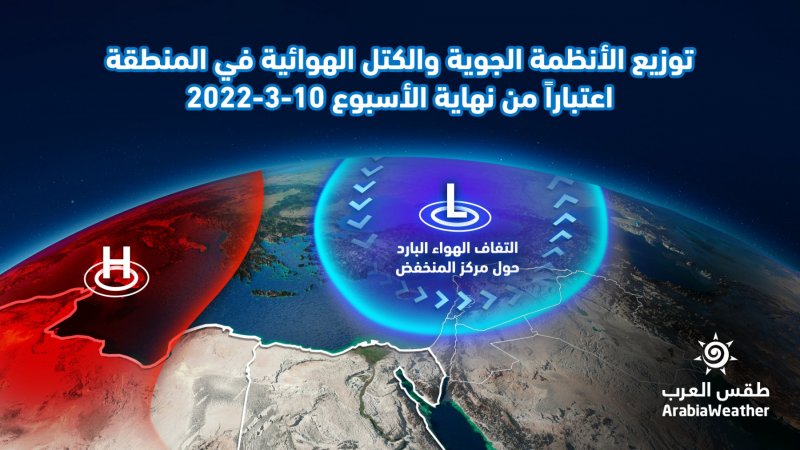 Expected direct effects on the whole of the Levant and Egypt

In the details, it is expected that the Levant will be affected on Friday by an air depression associated with a very cold and polar air mass, and the depression is centered in northwest Syria. The Levant is affected by the flow of polar winds behind the air depression with generally weak effectiveness, so that the clouds decrease and the weather turns to become very cold in most areas, and temperatures become around zero degrees Celsius in most areas and perhaps lower, with fears of frost formation starting from Saturday night / Sunday in large parts of the Levant.

As for the snow, the continued positioning of these polar air masses near the region during the next week requires more complex weather systems to cause snowfall, including the drop of the polar mass to the water basin from the eastern Mediterranean so that an air depression is formed and the generator works for the occurrence of rain and snow precipitation, It is not possible to deduce all the details from now on for that period, but it is clear until the time of writing this report that the extremely cold weather is the most prominent feature of the weather in the Levant during the next week. 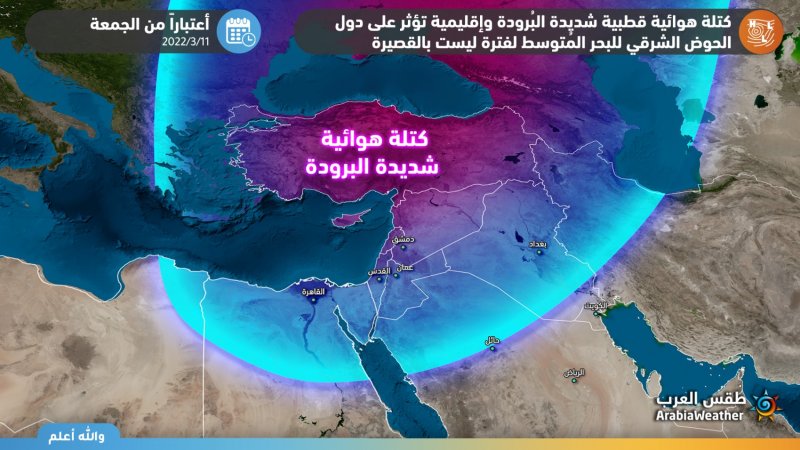 The Republic of Egypt will not be immune from the direct influence of the very cold air mass, as from Friday it is expected that the temperatures will be colder than their averages for this time of the year by about 6-8 degrees Celsius, and the weather will be cold in the northern regions and cold in southern Upper Egypt. Mostly cloudy, but the weather turns at night to become very cold in all parts, God willing.

The polar mass that affects the region occupies an area of one million, as this mass covers and affects Turkey, Syria, Jordan, Palestine, Lebanon, Egypt, large parts of northern Saudi Arabia, and Iraqi lands, and the area of this mass is very large.