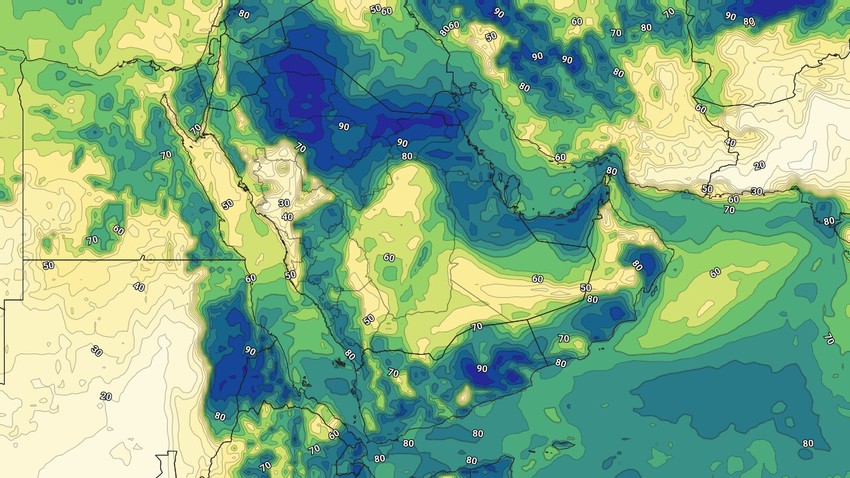 Arab Weather - Large areas of Saudi Arabia, Iraq, Kuwait, eastern Jordan and the Syrian Badia have been witnessing frequent rains since last week. These rains saturated large areas of land with water and also formed water bodies. The waters gathered in areas that did not witness rain, and thus the area of wetlands increased over the Arabian Peninsula, the Levant and Iraq.

In conjunction with the presence of large quantities of surface water, and low temperatures during the night, it is expected that dense fog will form over the north and east of the Arabian Peninsula, reaching the Levant, Iraq and Jordan, starting from Wednesday / Thursday night and Thursday morning repeatedly every day until the beginning of next week.

The fog reduces the horizontal visibility of the roads, so ArabiaWeather warns the brothers of users of external roads and highways that witness the formation of fog to take the utmost care and caution.

Fog will include areas where vital airports are located

Fog reduces horizontal visibility, and fog often causes confusion in air traffic and airport operations, and because the expected wet wave will have a wide impact, opportunities for fog will include many airports from the Arabian Peninsula, Iraq and the Levant.

The following is an illustration of the extent to which some airports in the Middle East are affected by the fog expected from night Thursday / Friday until early next week:

ArabiaWeather advises, in such foggy weather conditions, to:

Weather and expected temperatures in Jordan on Saturday 5-8-2021