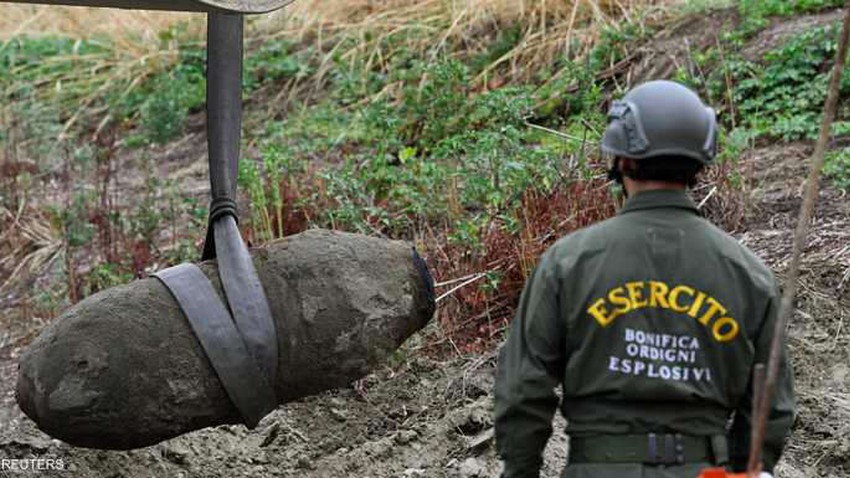 Weather of Arabia - The effects of the heat waves sweeping Europe this summer did not stop at recording record temperatures and igniting forest fires, but rather contributed, along with the drought, to the decline of water in the Italian Po River to the point where it revealed a huge American-made bomb from World War II that had been submerged under water for years .

The bomb was found on July 25 near the village of Borgo Virgilio in the north of the country near the city of Mantua, where Colonel Marco Nasi said: "Poachers found the bomb on the bank of the Po, Italy's longest river, due to a drop in water levels caused by drought." .

Military experts defused the 450-kilogram bomb, and then detonated it on Sunday, but disposal of the bomb was not easy, as about 3,000 people living nearby were evacuated to complete the disposal process, according to army statements.

The airspace in the area was also closed, navigation in the sector where the bomb was located, and traffic on a railway line as well as a nearby road were halted.

"At first some residents said they would not leave their homes, but in the last few days I think we have managed to convince everyone," said Borgo Virgilio Mayor Francesco Aporte, adding that the operations would not have taken place if the people had refused to evacuate.

Bomb experts removed the fuse from the US bomb, which the military said contained 240 kilograms of explosives.

After that, the assigned team, accompanied by the police, transported the bomb to a quarry in Midoli, about 45 km away, where it was destroyed.

Italy declared a state of emergency last month in the region around the Po River, which is experiencing its worst drought in 70 years, affecting the region that accounts for a third of Italy's agricultural production.