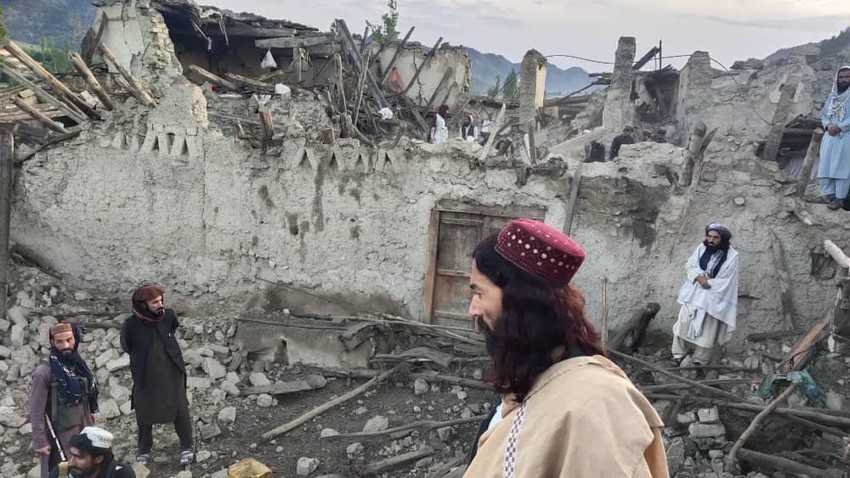 Arab Weather - The death toll from the devastating earthquake that struck southeastern Afghanistan, today, Wednesday, has risen to about a thousand, at a time when rescue operations are witnessing more nodules with the rain .

Previous figures spoke of the death of 130 people, and the figures quickly rose to 250 people, and then 280, and the Afghanistan Disaster Management Authority said that 950 people had died so far as a result of the earthquake, noting that more than 600 others were injured, and officials expected the number to rise more in the next hours.

A devastating earthquake struck early Wednesday morning in southeastern Afghanistan, with a magnitude of 6.1, and Paktika province was the most affected by the earthquake in Afghanistan, while much fewer casualties and losses were recorded in the neighboring province of Khost.

Afghan Interior Ministry official Salahuddin Ayoubi said most of the confirmed deaths were in Paktika, while Khost was less affected than its neighbor, where preliminary figures spoke of 25 deaths and 90 others hospitalized there.

Footage circulated by social media pioneers showed the massive destruction inflicted on remote villages in Paktika, where mud houses collapsed from the earthquake, while others were trying to search under the rubble for their loved ones and relatives.

This resident in Gayan district who filmed this video : “My home was the strongest in the district, damage from inside is even worse. My grandson who was buried was found after a long time. Alive.” pic.twitter.com/ZdeINwdnBI

More than 90 homes were destroyed at least in the rugged mountainous state, noting that local authorities use helicopters to transport the injured, but rescue operations and exhumation of bodies from under the rubble are proceeding at a slow pace, and the matter is further complicated by the rain.

Watch: #Afghanistan 's state-run news agency is reporting that at least 950 people have been killed in an #earthquake in the country's eastern Paktika province. https://t.co/oijOEI0EKp pic.twitter.com/9GCcayhe8Y

Pictures published by Afghan media showed houses reduced to rubble and bodies covered with blankets lying on the ground.

The earthquake occurred at 1:30 am local time, when the majority of residents were asleep.

According to the US Geological Survey, the earthquake occurred 44 km from the city of Khost in southeastern Afghanistan and was at a depth of 51 km, according to "Reuters".