After a severe drought during the winter season, the chances of rain will improve in parts of the Arabian Peninsula in the coming period 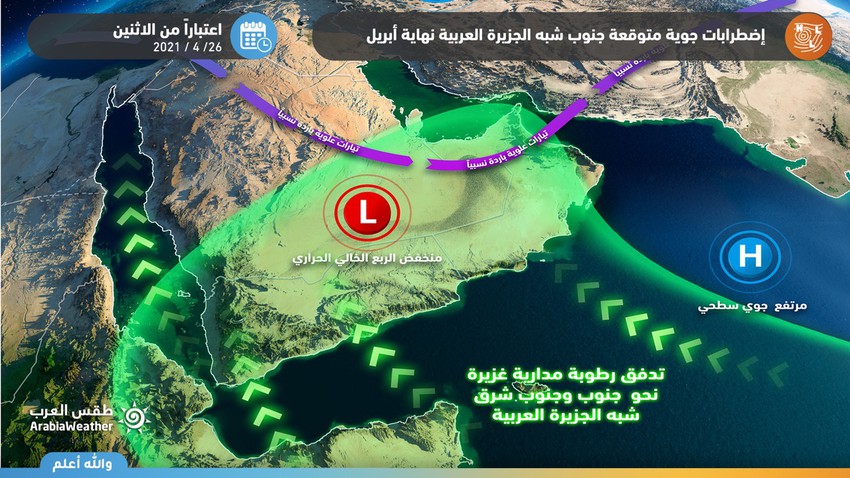 Drastic changes in the temperature of water bodies

The phenomenon of lanina prevailed during the past months, that is, the decrease in the ENSO Index (cooling), which is the temperature of the equatorial region from the waters of the surface of the Pacific Ocean, and it controls a large percentage of the movement of sub-tropical jet currents and is usually associated with the intensification of the effect of the tropical high on the Arabian Peninsula, while it tended to rise during the past few weeks And the gradual shift to the neutral phase, which indirectly contributes to the improvement of the chances of rain in the Arabian Peninsula.

(ENSO) is statistically related to the Indian Dipole Index ( IOD ), especially in regions 3 and 4, as it indirectly leads to raising the water surface temperature in the western part of the Indian Ocean and the Arabian Sea, which indicates the increasing amounts of moisture and water vapor in the air and its rush Into the Arabian Peninsula, and improved orbital interaction and rain performance.

The Southern Oscillation Index (SOI) records neutral values after recording high (record) positive values during the past months, reaching +17 in January, and the index represents the difference in air pressure between Tahiti Island and Darwin in northern Australia, where positive values represent high pressure Air in Tahiti (Central Pacific), which means cold waters in that region, as the westerly winds in the Arabian Sea became active (towards the low pressure in northern Australia) and thus the coldness in the western Arabian Sea increased, and this decrease in the index and its recording of neutral values is due to its correlation in the form of Close to the decline of the lanina phenomenon, the weakening of trade winds, and the reduction of cold currents to the central and western Pacific.

The maps of the upper wet masses indicate the depth of the wet wave in the western Indian Ocean with the end of April, when eastern wet waves are expected to cross towards the Arabian Peninsula, this coincides with the activity of the Kelvin wave in the Arabian Sea, which leads to a refraction in the subtropical jet stream.