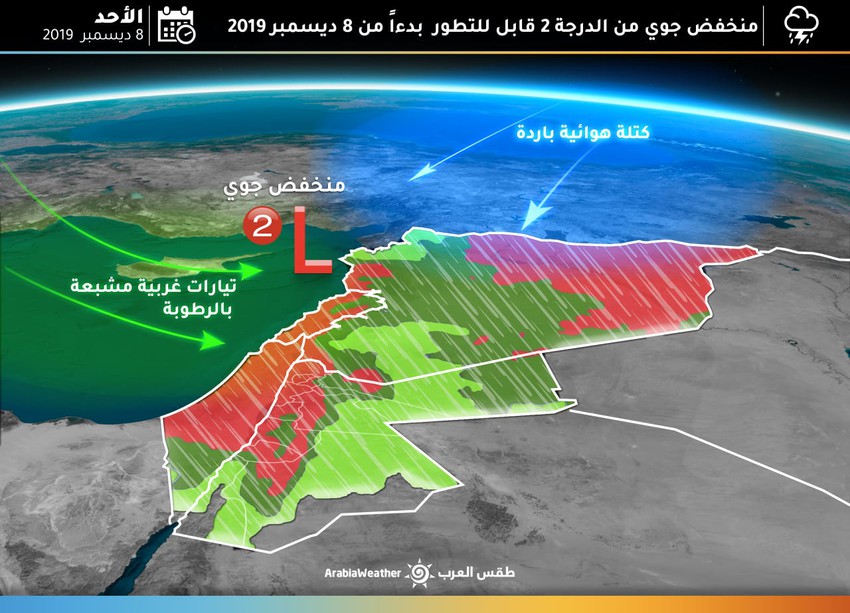 ArabiaWeather - Latest weather data received by the "ArabiaWeather" Regional Center for Meteorology indicates that a new low pressure will affect the Kingdom at the beginning and mid of this week and is currently classified as category 2.

It is expected that the effect of this depression will start with the hours of the day on Sunday, December 8th, with rainfall in the north and center of the Kingdom and at intervals, intensifying at night, extending to most areas of the Kingdom, and it could be heavy at times in some parts especially over the southern mountains.

The impact of the depression is deepening on Monday, so that rain is expected to continue during the day in many areas of the Kingdom, be heavy at intervals and coupled with the occurrence of thunderstorms, especially over northern and central areas. The rain will continue on Tuesday but will taper off by evening.

It is noteworthy that the Kingdom was affected on Thursday and Friday, 5 and 6 December, with a low pressure classified as category 1, as the weather forecasts indicate that there is another low that could affect the region by the end of next week, thus being affected by three depressions during 10 Days, which contributes to the improvement of the rainy season, which began weak this year and concentrated in the southern and eastern regions of the Kingdom.

Jordan Update at 6:00 pm | An accelerated decrease in temperatures in the coming hours

Live || A meeting with Dr. Sulaiman Al-Khawaldeh - the mayor of Qadisiyah

`Water` .. the storage of dams increased to 40 percent of its capacity

Because of the high water levels ... The Burma road in Jerash was closed

JORDAN - A gradual recession of the depression and extensive ice is expected tonight and early Saturday.

Live broadcast from Errachidia to transfer the opening of roads, due to the accumulation of snow

State of the roads until 1.00 pm on Friday in Tafilah

After being closed by dirt and gravel ... the Jdita - Ajloun road was opened