After the current warming wave, a radical reversal of the weather is expected after the middle of next week 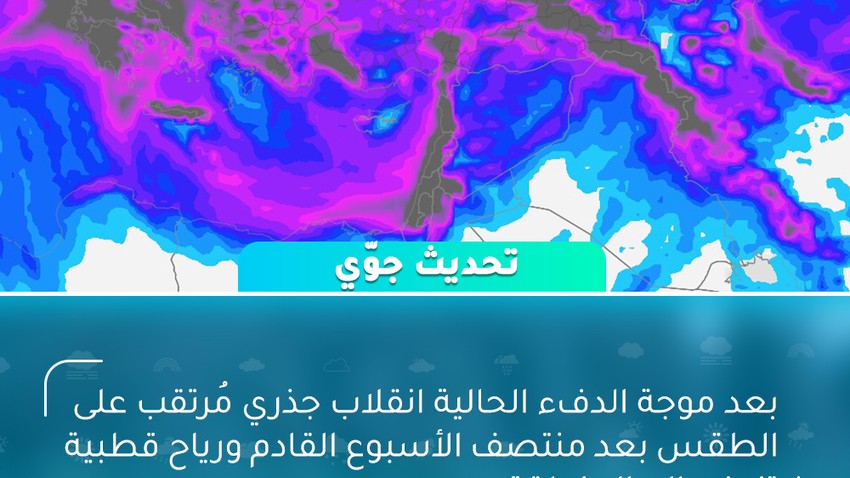 Arab Weather - Despite the great stability in the atmosphere and the wave of warmth that the Kingdom is exposed to these days, as temperatures fluctuate above their usual rates by many degrees and for several days, the Department of Operations Management and Weather Forecasts in Arab Weather closely monitors the output of the weather maps, which have become It indicates that there is a drastic change in the weather expected from the middle of the month (the middle of next week) and in conformity with the monthly weather forecast issued at the beginning of this month.

The latest weather data indicates that the Kingdom and the rest of the countries of the eastern basin of the Mediterranean are on a date with atmospheric activity, which is affected by a series of atmospheric depressions, starting on February 17th, accompanied by a significant drop in temperatures and a complete reversal of the atmosphere, as it is expected that These depressions are accompanied by an influx of polar winds rushing from the east of the European continent to the region, which will affect the Kingdom by very cold and rainy weather for several days, and these depressions can be classified as advanced degrees.

Based on that, the weather is expected to be as follows for the next ten days:

The chance of snowfall is closer than ever

The same weather maps indicate that polar winds are expected to rush to the eastern region of the Mediterranean Sea with the second part of next week, and these polar winds may deepen to a level that allows for the occurrence of large-scale snowfalls that may affect the capitals of the Levant, but it is not possible to broadcast in the matter of falling Snow is from now as the time distance is still far away.

The issue of snowfall in the capitals of the Levant is a complex matter that requires many factors to combine with each other, which are difficult to perceive by computer modeling in this time dimension, which makes some predictions inaccurate and subject to change, but despite this, it is undeniable that the computer modeling indicators for the same The period around the eruption of polar winds is the strongest since 2015, making mathematically the chance of snow is closer than ever.

ArabiaWeather will update the data first

Jordan - Weather Forecast | Average temperatures, moderate and sunny weather in all regions of the Kingdom | Sunday 25-9-2022