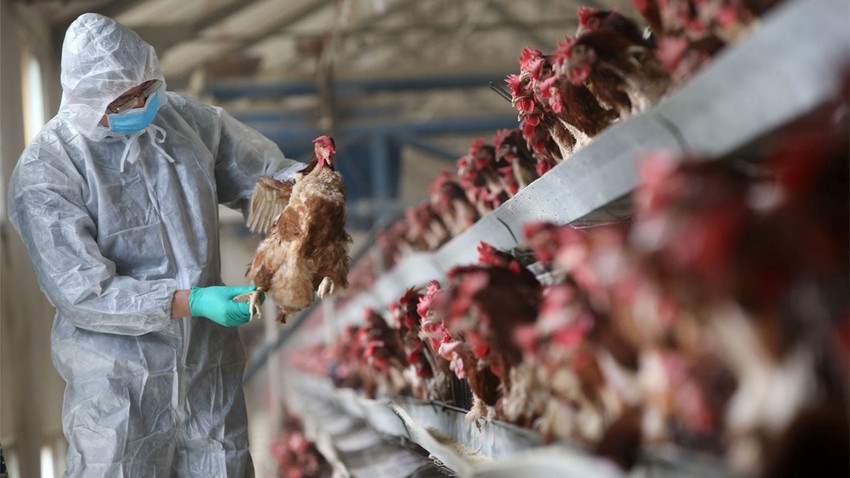 Weather of Arabia - Saudi Arabia took a decision after the emergence of a highly virulent bird flu in the Morbihan region of France, on the basis of which it temporarily banned the import of poultry meat and table eggs, according to Saudi newspapers.

And the newspapers "Al-Riyadh" and "Sabq" reported, on Saturday, that "the Riyadh Chamber informed its subscribers of imposing a temporary ban on the import of poultry meat, table eggs, their products and equipment from the Morbihan region in the Republic of France."

The two newspapers said that the ban came "in the background of reports issued by the World Organization for Animal Health (OIE), indicating the emergence of highly pathogenic avian influenza in the Morbihan region."

And last April, an outbreak of bird flu in the United States and France slashed global supplies of eggs and raised prices of basic foodstuffs at a time when the war in Ukraine disrupted shipments to Europe and the Middle East.

The higher prices affect consumers who rely on eggs as a cheap source of protein and an alternative to more expensive meat.

France is suffering the worst outbreak of bird flu ever, which has led to the culling of about 8% of chickens. When poultry are infected, entire flocks are culled to control the disease, which is usually spread by wild birds.

The deadly virus and war are the latest challenges facing egg suppliers, who are also struggling with labor shortages, rising energy costs and grain used for feed.

Bird flu outbreaks in the United States and France have slashed global supplies of eggs and raised prices for basic foodstuffs as the war in Ukraine disrupts shipments to Europe and the Middle East.

High prices for eggs also affect the profits of bakeries and food companies, which suffer from rising costs of flour and other merchandise.

"Middle Eastern countries that were buying Ukrainian eggs before the war are trying to find alternative supplies in Europe," said Loic Colombel, vice president of the French Egg Producers' Association.

He added, "There is a problem of bird flu in France and throughout Europe as well. No other European country has a great ability to compensate in the short term."