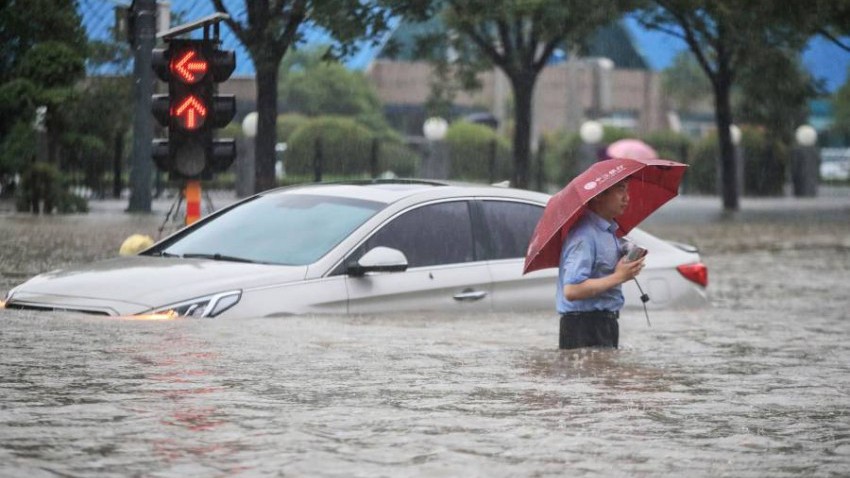 Weather of Arabia - The authorities of Zhengzhou, located in Henan Province, central China, announced that as of seven in the morning on Wednesday (July 21), about 200,000 people had been evacuated and 36,000 of the city's residents were affected after dams blew up and the water level in the rivers rose due to heavy rains. In addition, 25 people died after torrential rains inundated a subway.

While horrific pictures spread on social media of passengers stuck in a train carriage, they were submerged in water to their shoulders, and pictures spread from the streets of Zhengzhou, showing pedestrians being rescued from drowning in torrents and floods.

The authorities had issued the highest level of weather warning in Henan Province, which was ravaged by historic floods. Although seasonal floods are common in China, scientists say climate change is causing an increase in extreme weather events.

The Chinese People's Liberation Army Regional Command said in a statement that a 20-meter-long fault appeared in a dam in Luoyang City, a city of about 7 million people in Henan Province. And she warned that "the dam could collapse at any moment." The army announced that it had sent soldiers to carry out emergency work, including diverting the floods.

The cause of strong floods in China

Annual floods during China's rainy season cause chaos and erode roads, crops and homes, but the threat has grown for decades, in part because of the widespread construction of dams and levees that have severed links between the river and nearby lakes and disrupted floodplains. The Zhengzhou Meteorological Administration noted that the highest daily rainfall was recorded since records began 60 years ago.

China experiences floods every summer due to monsoon rains. And last year, unprecedented floods in the southwest of the country destroyed roads and forced the evacuation of tens of thousands of residents to safe areas.

And the local meteorological authorities raised the state of emergency response to the first level, in light of expectations that heavy rains will continue in the region until Wednesday night.

Henan Province has been hit by storms since the weekend in an unusually active rainy season, which caused major rivers to overflow and inundated streets in 12 cities, disrupting the daily lives of millions of Chinese.