After the moments of panic experienced by the residents of the Chinese city of Zhoushan, meteorologists explain why the sky suddenly turned red 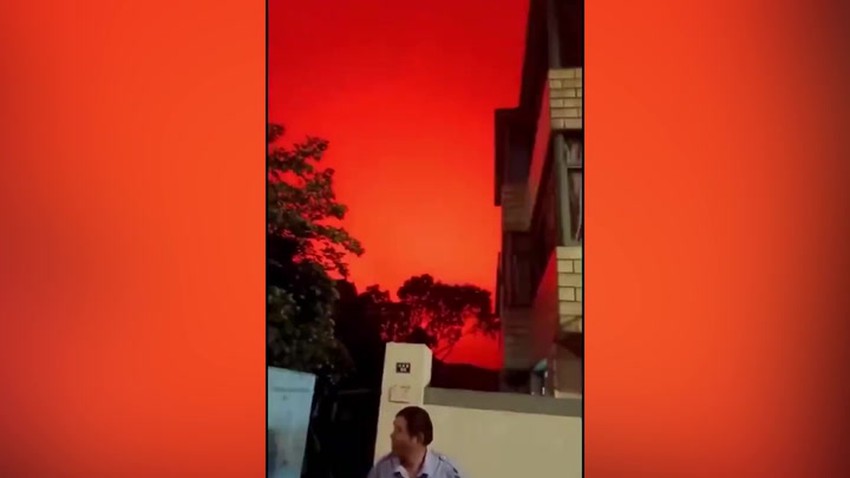 Weather of Arabia - Residents of the coastal city of Zhoushan in eastern China were surprised on Saturday evening, as the sky above them suddenly turned red for a short period, raising fears of a possible fire or a strange phenomenon.

The videos and photos shared by local residents showed a scene of the sky in scarlet red, as the residents came out of their homes to witness that unique moment, and in the video, sounds of horror can be heard through which people expressed their surprise and confusion at what they saw.

Officials in the area confirmed the cause was not a fire, as no fire was reported in the coastal city at the time when the sky turned red.

Experts also explained that no geomagnetic or solar activity could be a possible reason why Zhoushan's sky turned red. Solar and geomagnetic activity (which can change the color of the sky) in the coastal city was quiet on Saturday.

But the city's meteorologists soon concluded that the reason behind this sudden change in the color of the sky was due to the refraction of the lights of local fishing boats through the low clouds that were present in the sky at the time, specifically from a fishing boat that was harvesting shore fish in the Pacific Ocean.

According to experts, the weather conditions in the coastal city of Zhoushan were ideal for the occurrence of the phenomenon of refraction, as the sky was cloudy with some mist stuck in the layers of the atmosphere, which led to an unusual redness in the color of the sky, which caused a brief panic.

The weather was good for more water spray to form in the atmosphere, which scattered the light of the fishing boats and created the amazing look of red skies that the residents saw.

You may also be interested in: If the clouds are white, why do they become dark gray before it rains?

You may also be interested: Why did Jordanians watch the sunset yesterday in a distinctive red color?!