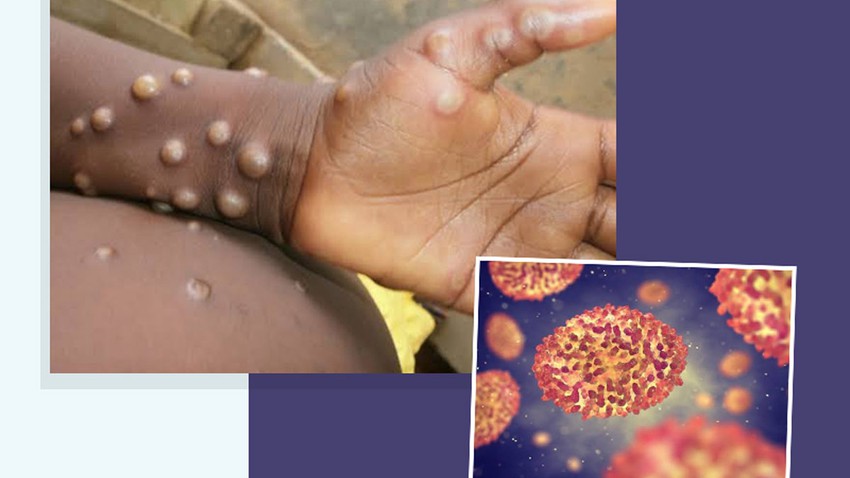 Weather of Arabia - Countries around the world continue to announce confirmed cases of monkeypox since the first case was reported on May 7 outside countries where the disease usually spreads, which was considered a rare and unusual outbreak of the disease.

Monkeypox is a well-known disease in Africa, and rare cases elsewhere in the world are usually associated with travel there, but health officials have little evidence about the source of new monkeypox infections, and there is concern that the virus may spread through communities. Through new ways of transmission.

Monkeypox is a rare skin disease that affects a person as a result of a viral infection. It is similar to the well-known smallpox, except that it is less transmissible, and causes milder and less lethal symptoms. Smallpox was declared eradicated in 1980.

There are two known types of monkeypox, one so fatal that it kills up to 10% of infected people, and the second type (currently reported in England) that is milder, with a mortality rate of less than 1%.

Read also: Experts reveal the cause of monkeypox outbreaks in Europe

What are the symptoms of monkeypox?

The incubation period for monkeypox (the period between infection and symptoms) ranges from 5 to 21 days, and symptoms of monkeypox usually begin with a combination of fever, headache, muscle aches, back pain, chills, fatigue, and swollen lymph nodes (enlarged lymph nodes usually help). Doctors distinguish monkeypox from chickenpox or smallpox).

Once a fever appears, the main feature of monkeypox is a bad skin rash, which tends to develop after one to three days, often starting on the face and then spreading to other parts of the body.

The rash goes through an unsightly maturation process, from flat lesions to raised lesions then vesicles, then blisters (pus-filled lesions) and finally crusts (squamous lesions) before they stop developing.

As for treatment, the patient usually recovers on its own, and there is currently no specific treatment recommended for monkeypox, with most people recovering within a few weeks.

Smallpox vaccination is believed to be highly effective in preventing monkeypox, but because the eradication of smallpox was declared over 40 years ago, first-generation smallpox vaccines are no longer available to the general public.

Why is the disease called "monkeypox"?

Monkeypox virus belongs to the type of corticovirus. It was first discovered in 1958 when two outbreaks of smallpox-like disease occurred in lab monkeys kept for research, hence the name .

But monkeys may not be responsible for the outbreak, and the natural source of monkeypox remains unknown, although the World Health Organization says rodents are more likely.

The UN health agency says: "In Africa, evidence of monkeypox virus infection has been found in many animals including cord squirrels, tree squirrels, gambian rats, and various species of monkeys."

Where is monkeypox found?

Monkeypox is spread primarily in the tropical rainforest regions of central and western Africa and is not commonly seen in Europe.

Infection and modes of transmission of monkeypox

Secondary or human-to-human transmission can result from close contact with the respiratory secretions or skin lesions of an infected person (rash) or from contact with objects that have recently been contaminated with the patient's fluids or pest-causing substances.

The disease is transmitted primarily through respiratory particles in the form of droplets that usually require long periods of face-to-face contact, exposing family members of active cases to a high risk of infection. The disease can also be transmitted through vaccination or through the placenta (congenital monkeypox), and there is still no evidence that monkeypox can persist in human beings simply by transmission from one person to another. (Source: WHO )