Again: a cold night awaits the Kingdom and the need to wear a light coat after the midnight hours to match the relative cold weather 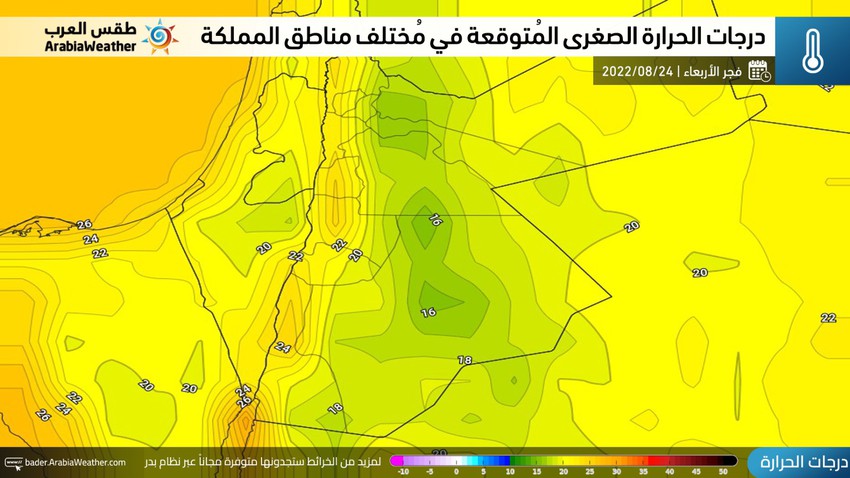 Arab Weather - Forecasters at the "Arab Weather" Center said that it is expected that the Kingdom will continue to be affected today, Tuesday, 23-8-2022 by the air mass with temperatures below their usual rates, so that the weather continues in mild summer in mountainous heights, and normal summer in general in regions and cities. Main, and relatively hot in the Jordan Valley, Dead Sea and Aqaba.

Similar to last night, after sunset hours, it is expected that the temperature drop will accelerate again, so that the weather will be generally nice at first, but it will quickly turn with night hours and even early morning hours to cool in many Jordanian cities, including the capital Amman, With a rise in humidity and the appearance of low clouds in the north of the Kingdom, and activity in the westerly winds sometimes. The weather condition is hour by hour and during the periods of the day, you can find it inside the Arab Weather application, click here

The atmosphere at that time (ie after midnight) becomes unsuitable for outdoor sessions due to the combination of cold weather conditions and high relative humidity, as well as the activity of northwest winds sometimes. Therefore, "Arab Weather" advises to wear a light coat to match the cold weather, as temperatures are expected to drop below 23 degrees Celsius with the early night hours, and reach 19-15 degrees Celsius at dawn in the high mountainous heights and the eastern plains.