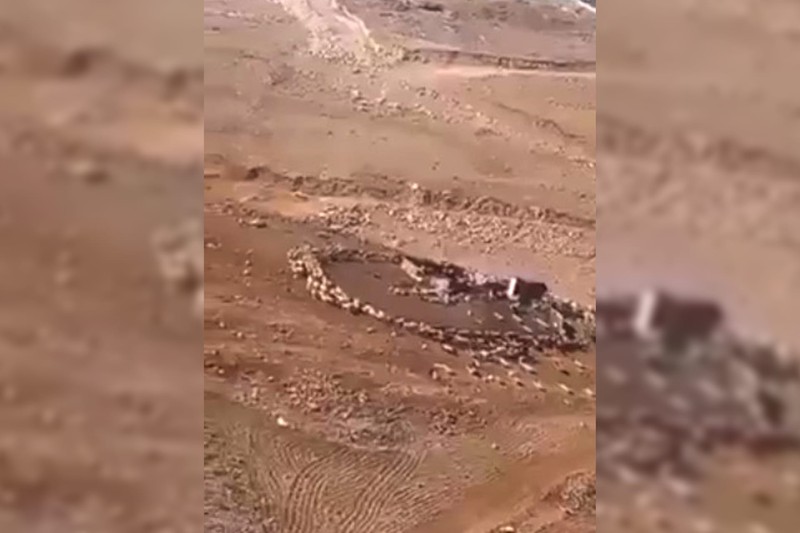 Weather of Arabia - An official at the Jordanian Ministry of Agriculture said, on Wednesday, that the video, which was circulated on social media, shows a herd of sheep rotating in a circular motion related to the behavior of "mothers and newborns" from the herd members, stressing that a series of checks and procedures have been taken to verify The presence of any pathological infection or pathological behavior.

The media spokesman for the Jordanian Ministry of Agriculture, Lawrence Majali, said in a statement to “CNN” in Arabic, because the ministry monitored the site of the accident as soon as the video clip was transmitted, and it was found that it belonged to a barn of the herd in Karak Governorate (about 124 kilometers) south of the capital Amman, and that One of the citizens took the video, which sparked controversy among the people in the area, although the video does not exceed minutes.

And Al-Majali indicated that the rotation movement lasted only for minutes, and that it was related to the behavior of mothers who were looking for their newborns after returning from the pasture outside the barn, according to the analysis of the Ministry’s teams, and that each one returned to her place after finding her newborns, while indicating that the examination through specialized committees confirmed the safety The herd is free from any disease.

Also read: Scientists provide a possible explanation for the mystery of sheep running in China for 12 consecutive days

He added, "We have monitored the issue, and we will continue to follow it later, and we are still monitoring and reviewing what was circulated in foreign press reports about the circulation of a herd in China."

CNN in Arabic tried to communicate with the young man who owned the video, but he refused to give permission to the media after he posted the video on his personal page on Facebook, as he deleted it. A source close to the young man said that he filmed the clip of the herd of sheep for a short period, while he estimated that the movement of the herd would continue for about 10 minutes, according to him, without CNN being able to verify another source.

The source attributed the young man's deletion of the video to the reactions of some people in the area where he took it.