Air systems prevailing in the Arab world during the week 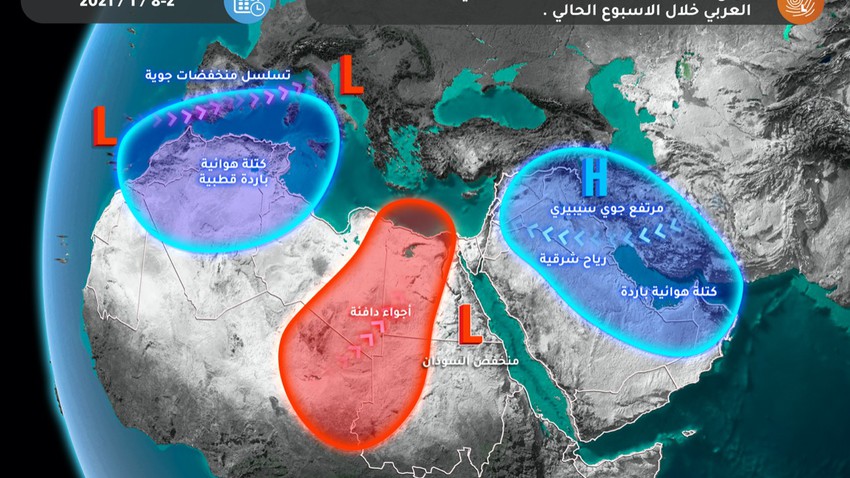 Weather of Arabia - the weather systems are distributed this week in the Arab world between a series of depressions in the western section, a Siberian air height in the eastern section and a warm air mass above the middle, which is an air organization that is not much different from the previous week.

A sequence of inter-polar and Atlantic depressions over the Maghreb

Both Algeria and Tunisia are affected by a rapid depression and a cold air mass at the beginning of the week, as showers of rain and a drop in temperature fall on Sunday, provided that the weather temporarily stabilizes on Monday before a new depression begins rapidly affecting the same areas on Tuesday.

On Tuesday, a highly effective Atlantic depression is approaching the Kingdom of Morocco, which brings with it heavy rains over large areas of the country until the end of the week, and also brings with it large amounts of snow over the high Atlantic peaks.

Weather stable in Libya and Egypt, temperatures are above average

An air height dominates the central Mediterranean, ensuring stable conditions in both Libya and Egypt, and temperatures are recording successive rises in Egypt and eastern Libya during the week, while temperatures are low in western Libya with increasing indications that the western parts of Libya will be exposed to dust storms during the half Second of the week.

The Siberian air rise continues over the Levant, Iraq and northern Arabia

There is no significant change in the air system in the Levant region, Iraq and the north of the Arabian Peninsula during the current week, as the Siberian air height continues to extend over these areas to ensure stable weather and the continued blowing of the eastern winds that increase the feeling of cold, especially at night.

Cases of air instability in central and western Saudi Arabia and Yemen, and a decrease in temperature in the Sultanate of Oman and the UAE

The chances of rain continuing in parts of western, central and eastern Saudi Arabia and the highlands of Yemen due to a state of air instability throughout the current week with varying intensity from day to day, coinciding with a gradual decrease in temperatures in both the Sultanate of Oman and the UAE due to an extension of a cold air mass from the east, As temperatures become lower than their annual levels, with stable atmospheres throughout the Arab Gulf states.