alert | Expected intensification of the speed of the winds of Al-Bawareh, dust waves and turbulent waves in many Arab Gulf countries 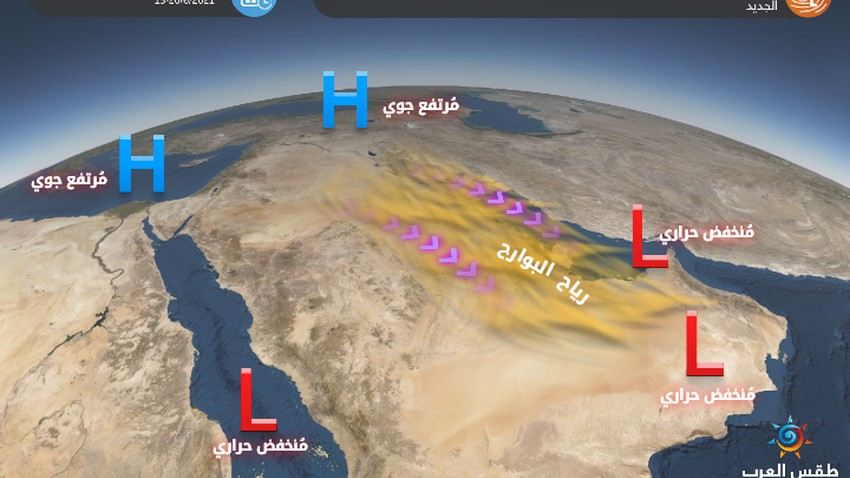 Arab weather - the latest outputs of the received numerical models indicate expectations of a significant increase in the speed of the northwest winds, which are known locally as the Al-Bawareh winds, throughout the days of the current week, especially at its beginning, causing the formation of dust waves and sand storms in many Arab Gulf countries, which leads The occurrence of a decrease in the extent of horizontal vision, and perhaps its absence in some cases, in addition to the occurrence of a rise and turbulence in the waves of the Arabian Gulf.

Great intensification of the speed of the Al-Bawarih winds over Iraq and Kuwait, and an alert of sandstorms

It is expected, God willing, that the Al-Bawarih winds will intensify over Iraq and Kuwait at the beginning of the week, with a steady wind speed ranging between 50-65 km/h, and gifts exceeding the 90 km barrier and some gifts approaching the 100 barrier, especially in Iraq, and such wind speed is suitable for generating dust waves Strong and sandstorms starting from southern Iraq, extending to all areas of Kuwait.

Al-Bawarih winds are expected to ease slightly during the second half of the week while remaining active at speeds, accompanied by strong to severe gusts at times, which results in the continuation of dust waves forming over southern Iraq through all areas of Kuwait.

Al-Bawareh winds are intensifying in Saudi Arabia, and dust waves include the capital, Riyadh

According to the received numerical outputs, it is expected that the Al-Bawarih wind speed will intensify over eastern Saudi Arabia during the beginning of the week, and the steady wind speed will exceed the 50 km/h barrier, and the gusts will exceed the 75 km barrier, causing dust waves to move from Kuwait towards the eastern Kingdom of Saudi Arabia. In addition to the formation of some dust waves locally, the dust-laden Al-Bawareh winds affect the capital Riyadh in the form of northerly winds, pushing the dust waves towards the capital, Riyadh, and alerting of the risk of a decrease in the horizontal visibility and perhaps its absence in parts of the Kingdom.

It is expected that the Al-Bawarih wind will decrease in intensity during the second half of the week from the capital, Riyadh, as it continues to blow strongly over the eastern regions, causing the continuation of the dusty weather in those areas, and part of the dust may extend to Riyadh at times, but less sharply.

Dust extends towards Bahrain and Qatar

Al-Bawareh winds reach Bahrain and Qatar, and they are active in speed and accompanied by strong gifts, with a constant wind speed ranging between 35/40 km/h, and gifts approaching the 70 km/h barrier, especially in the State of Qatar, and active winds raise dust and dust. And it is laden with dust due to its desert source, which leads to a dusty atmosphere with varying intensity.

Al-Bawareh winds are intensifying in the Emirates and are dusty

Al-Bawareh winds intensify in the UAE, especially at the end of the week, and they are moderate to brisk, with a constant wind speed ranging between 35-40 km / h, accompanied by strong gusts of more than 60 km / h, especially in the western regions, which raises dust and dust.

Turbulent waves all days of the week in the Gulf Sea

As a result of the occurrence of a significant intensification of the surface wind speed, the waves of the Arabian Gulf are expected to be turbulent throughout the week, and the height of the waves in the width of the sea exceeds 2 meters during some days, and the sea will be rough on parts of the coasts of Bahrain, Qatar and the UAE.

What is the reason for the gusts of wind?

The reason for the Al-Bawarih winds to blow over the Arab Gulf states is due to the different values of atmospheric pressure. As a result of the difference in specific temperature between land and water, areas of high air pressure are formed over the waters of the Mediterranean Sea, coinciding with the deepening of the Indian seasonal depression and the branching of its centers over the Arabian Peninsula, specifically over Kuwait And in southern Iraq, as a result of pressure differences, winds move from the high atmospheric pressure range to the low atmospheric pressure range in the form of northwesterly winds that increase in intensity according to the exacerbation of the influence of the seasonal depression of India over the Arabian Peninsula.

After the recent changes, learn about the types of residency and entry visas to the UAE