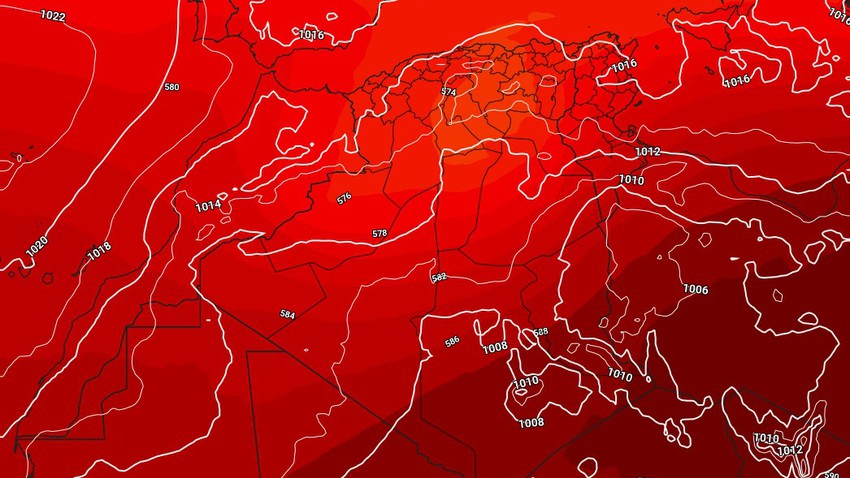 Arab Weather - Temperatures drop on Thursday, and the weather is relatively cold in the mountainous heights, and mild to moderate in the northern regions, relatively hot in the central regions, and very hot in the southern regions, and the northern regions continue to be affected by strong weather turbulence, which results in the emergence of clouds at altitudes. There are different thunderstorms and showers of rain that are heavy to very intense in all internal heights, especially during the afternoon hours, which leads to the formation of torrential torrents and torrential torrents, and the rain may extend towards parts of the central and eastern coasts, and the winds are fluctuating in direction and light to moderate speed, sometimes active in Some areas, as well as east to northeast, are moderate for speed activity and accompanied by strong gusts in the east and center of the country, and they are intensely dusty and dusty.

There is also a slight rise in night temperatures compared to the previous nights, and the weather is cold in the mountainous heights, relatively cold in the northern regions, pleasant in the central regions, and relatively warm to hot in the southern regions, and clouds continue to appear at different heights, and heavy thunder showers Of the rain in the northern regions, it is more concentrated in the eastern part, with low clouds crossing and touching the surface of the earth causing the formation of dense fog.

The winds are fluctuating and light to moderate in speed, sometimes active in some areas.