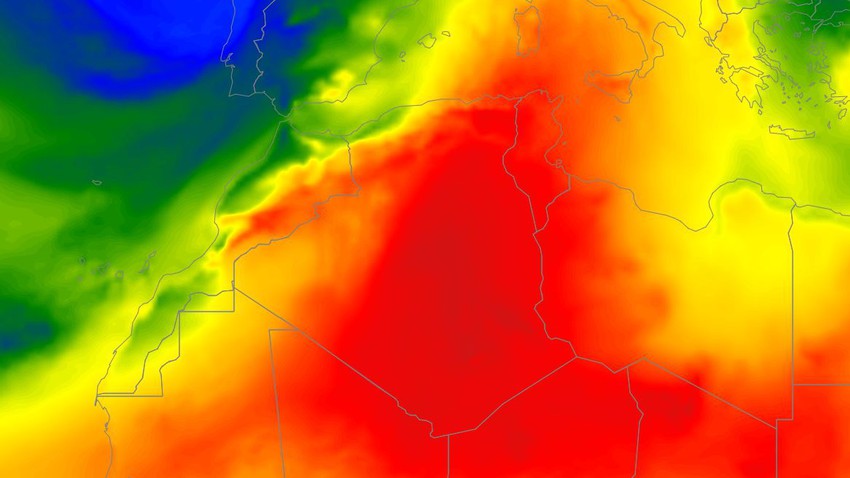 Weather of the Arabs - The weather systems in the Algerian Republic are represented during the next week by the concentration of a very hot air mass over the eastern parts of Algeria, accompanied by the deepening of a desert air depression in those areas, while the western parts of it witness the rush of northwestern moderately hot currents, which means that the region will witness differences Clear thermals between all regions.

A clear difference in temperatures between the states of Algeria

It is expected that there will be a gradual rise in temperatures during the week, following the construction of a strong air rise in all layers of the atmosphere in the northwest of the African continent, so that the temperatures will be higher than the usual rates for this time of the year by about 6-8 degrees Celsius in the eastern parts and some interior regions. While it is about to slightly less than its normal rates in the western and coastal parts, including the capital Algiers.

A noticeable decrease in the chances of rain from most areas

Rain chances are expected to decline in most regions of Algeria, while scattered clouds appear at medium and high altitudes, interspersed with some cumulus clouds in the northern regions, so that thunderstorms of rain fall on random and geographically narrow areas, while the winds are south to southwesterly moderate. Speed, it is active in the afternoon hours and is dusty and dusty in some areas.

In light of this, the Arab Weather warns of low horizontal visibility, especially on desert external roads, due to dust and dust stirred up.