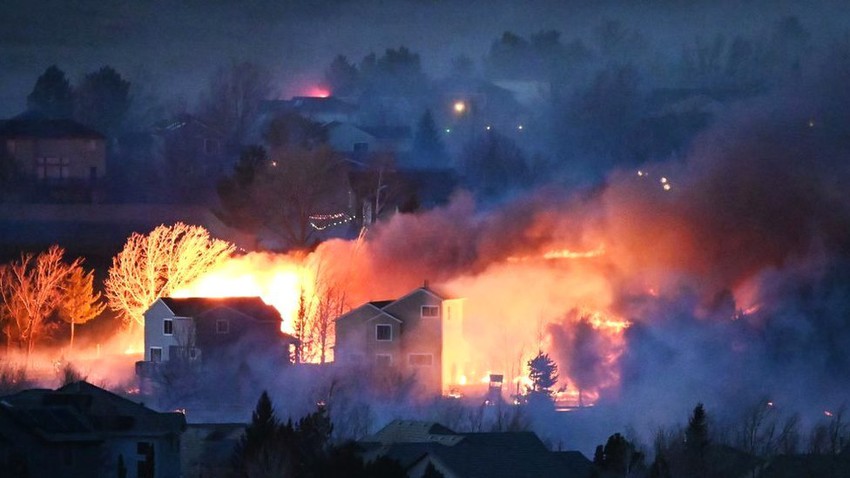 Weather of Arabia - After the fires that ravaged entire neighborhoods in the US state of Colorado, from Friday night to Saturday, heavy snow fell that quelled the flames of the fire and put out many fires, in a strange sight of white snow covering the charred spaces.

At least 500 homes were destroyed in the fires and tens of thousands of people were forced to flee, and it was like a "miracle", according to state Governor Jared Polis. However, the damage is severe, as aerial footage showed entire streets turning into piles of smoldering ash. The fire affected the suburbs and was not limited to rural areas, as was the case previously.

Some families "had only a few minutes to pack what they could, get children and animals into the cars and leave," Jared Polis said Friday at a press conference. It happened "in the blink of an eye," according to the governor.

Huge flames erupted, fueled by strong winds, which reached a speed of 160 kilometers per hour on Thursday. The fire was attributed to the collapse of power lines on barren land. It is not yet known the exact number of homes that were destroyed by the fire. And Boulder County Sheriff Joe Pele expected him to be over 500, saying he wouldn't be surprised "if he gets over a thousand."

On Friday, a layer of snow covered the ash left by the fire, in a completely different scene than it was the day before.

The National Weather Service (NWS) has put part of this mountainous state in the American West on alert for a winter storm, expecting heavy rain in the coming days. This snow would "really help us", said Joe Pele, ruling out any future spread of the fire.

And local authorities lifted part of the eviction orders for the night. However, entry is still denied to some areas, such as Superior, which has a population of 13,000.

Like most of the American West, Colorado has been suffering from a drought that has been going on for years, making its areas vulnerable to wildfires. "One of the many factors leading to the currently devastating bushfires, is the recent record drought," the Boulder Department of Meteorology wrote in a tweet.

With climate warming, droughts and heat waves are likely to increase in intensity and frequency, creating favorable conditions for forest or bush fires. In recent years, the American West has witnessed unprecedented fires, especially in California and Oregon.