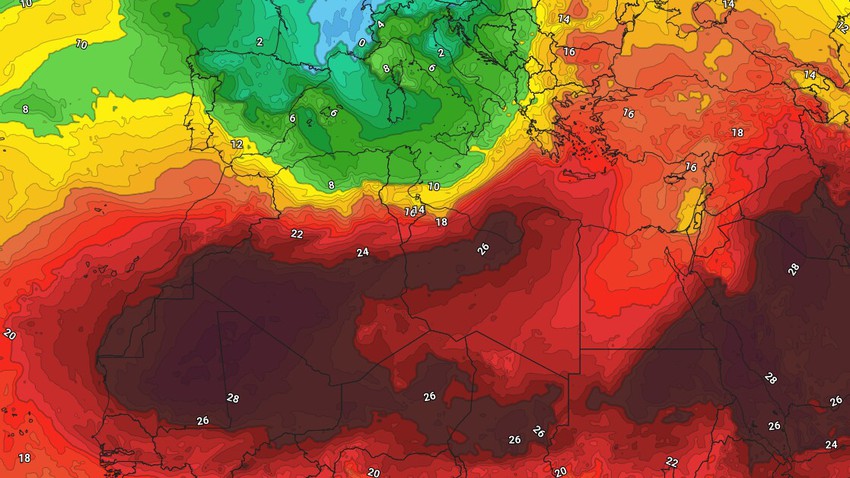 Weather of Arabia - an Atlantic storm is moving towards the west and southwest of the European continent on Thursday, as it is expected to hit Britain, France and Spain with force, bringing with it large quantities of rain exceeding 150 mm and winds that may touch the speed of their gusts of 170 km / hour on the coasts of Britain and Ireland

The storm will also hit France with winds of 180 km / hour on its western coasts on Friday and Saturday, as well as with heavy rains and low temperatures.

Strong winds and dust over Tunisia, Algeria and Libya

The effects of the storm will reach the countries bordering the western basin of the Mediterranean, specifically Algeria, Tunisia and Italy starting on Saturday, then later Greece and the Balkan countries, the effects of the storm will be in the form of strong winds on the coasts of Algeria and Tunisia touching the speed of gusts of 100 km / hour, as well as The rain will be heavy at times in northern Algeria and Tunisia due to the crossing of the cold air front accompanying the depression.

Active south-westerly winds blow speeds in southern Tunisia and northwestern Libya on Friday, creating a wave of dust in the governorates of Tataouine and Gabes in the noon and afternoon hours, before the intensity of the winds recedes in the evening and the intensity of the dusty weather decreases with it.

The sea on the Algerian and Tunisian coasts is greatly disturbed, as waves are expected to reach 4 rains in the width of the Algerian eastern coast.

The temperatures will drop dramatically in northern Algeria, Tunisia and northwest Libya, starting from Saturday, when the weather becomes generally cold, especially in the mountains, with the opportunity for the first snow showers to fall on the peaks of the hills of Jarjara, Babour and Algerian Aures.