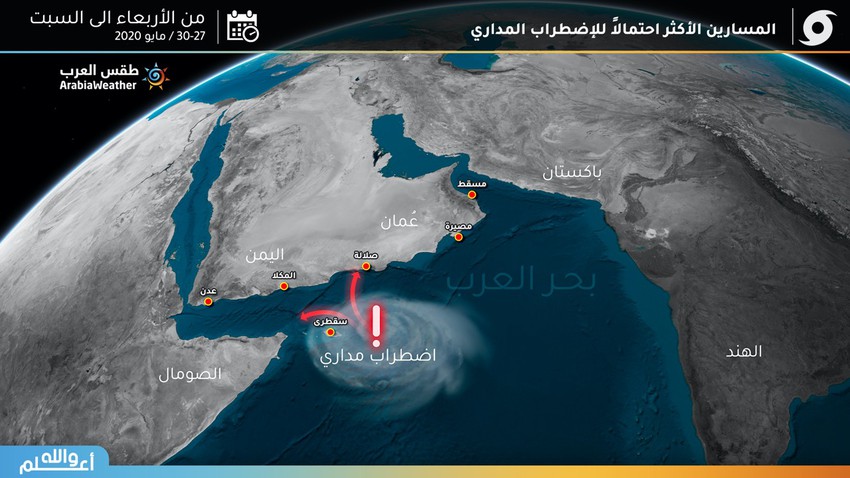 Weather of Arabia - The tropical situation began affecting the coasts of Dhofar Governorate and the coasts of eastern Yemen, and the heavy rains began to rain in all of the cities of Salalah, Rasut and Oman's Zalcot, in addition to the Yemeni city of Ghaydah.

The artificial satellite images indicate the continuous flow of rain clouds from the Arabian Sea towards the Omani Dhofar Governorate and the Yemeni Mahrah Governorate, and consequently the continuation of rain in these areas. It is abundant for the most part running on valleys and rising water levels in roads and streets.

The orbital state over the waters of the Arabian Sea is still classified as an orbital strike with expectations that it will develop into an orbital air depression within the next 48 hours on its way north towards the coasts of Salalah, Rasput and Zalqut Oman, and this is the path most likely according to the totality of numerical models and also the digital outputs of air maps, but There is a second, but less likely, path. The tropical depression moved westward towards the coasts of Yemeni death along with the coasts of the Sultanate of Oman, but this path is considered unlikely or low-probability.

Prince of Northern Borders requests an urgent report on the situation of the children, Jawaher and Wael

Saudi Arabia Dusty weather in the coast of Jizan Monday

Emirates | Possible thunderstorms on Monday in these regions

The devastating Nablus earthquake 1927 ... what do you know about it and how many casualties and how much damage was left behind?