Arab weather: After three weeks of marking, drought is a prominent feature in Saudi Arabia 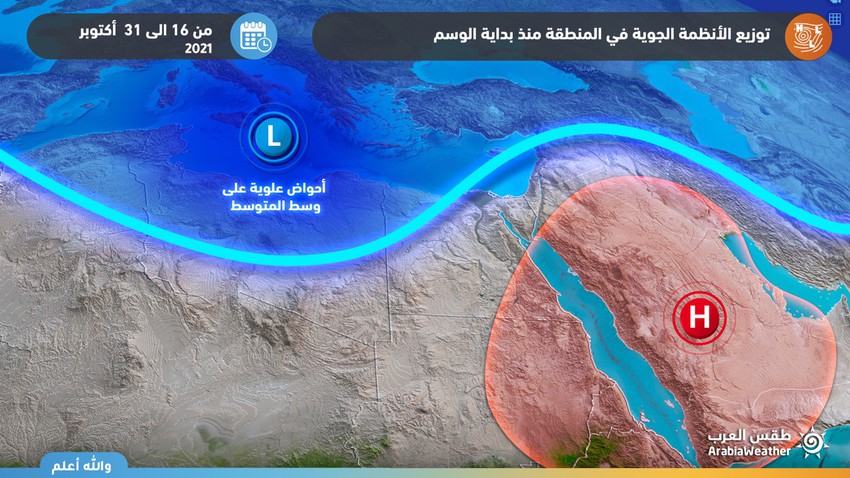 Arabia weather -   Saudi Arabia and the rest of the Arab East live on the reality of stable weather and lack of rain, despite the lapse of three weeks of the marking season, which is characterized by its rain and the succession of its bounties, but the Kingdom is still far from any strong or comprehensive rain wave, and thus the most prominent reasons that control after God’s will are few rain in the area.

Download the Arab Weather application, which provides accurate weather forecasts for thousands of regions in the Arab world, click here.

In the details, the upper activity focused during the last period on the central Mediterranean between Libya and Tunisia, so that the influx and transfer of cold air from the high polar regions to the center of the European continent and later to parts of Libya, Tunisia and Algeria continued, as depressions and Mediterranean storms formed in those areas, which resulted in There has been a lot of rain in the past several days.

On the other hand, in such weather patterns a reverse situation occurs, so that these upper basins rushing towards the middle of the Mediterranean Sea intensify the jet stream over northern Saudi Arabia and the Levant to take the role of a wall against any cold air coming from the north, so that the Arab Mashreq, including the Kingdom, is under the influence The subtropical atmospheric high to form a barrier to block the approach of cold masses from the north, or even wet waves coming from the south, i.e. from the Arabian Sea.

It is worth noting that the jet streams separate the cold air in the north from the warm air in the south at a level of 300 to 200 hectopascals, i.e. at an altitude of 10-12 km.

lower layers of the atmosphere

On the surface, the summer regime continued to dominate the atmosphere of the Arabian Peninsula, the Sudan depression became active and expanded towards the southwest of the Kingdom, and the humid winds coming from the Horn of Africa infiltrated as a result, as if in the summer, a beneficial air system prevailed in the southwestern highlands, which led to the formation of clouds Cumulus and thunderstorms on more than one occasion, praise be to God, and the cold upper basins not rushing from the north towards the eastern basin of the Mediterranean and northern Egypt, prevented an effective response from the Red Sea depression.

It can be summarized from the above, that the continued stability of the distribution of air masses and air systems from the Atlantic Ocean, the Arctic and the European continent, led to the continuation of the cold air rush towards the middle of the Mediterranean for a not short period, and therefore the proliferation of clouds and precipitation continued in those areas, which makes the Kingdom within The range of an air-stable region, i.e. far from any air activity, in addition to the Kingdom remaining under the dry winds in various layers of the atmosphere, with the exception of the southwest of the Kingdom, which benefited from the extension of the Sudan depression and the accompanying humid winds.

It is worth mentioning that the cases of raindrops are repeated in the climate archives of the Kingdom, due to the fluctuation of the Kingdom's climate from year to year, and the fact that the Kingdom, like other regions of the world, is strongly affected by huge climatic phenomena such as La Niña and other weather variables that contribute among dozens of other variables in the weather condition.

Saudi Arabia | Dust and low horizontal visibility in Riyadh and Sharqia, and expectations for its continuation in the coming hours

Friday: an additional deepening of the cold air mass over large parts of Saudi Arabia